Please join us for an evening of politics and conversation over a pint at the Seattle Chapter of Drinking Liberally.

Tonight we will be joined by Secretary of State candidate, past Public Delegate to the United Nations, and former two-term Seattle Mayor Greg Nickels.

(During his last visit to Drinking Liberally, Mayor Nickels presented the chapter with a “Republican St” street sign. It still hangs over the bar, plastered with liberal political stickers.)

We meet every Tuesday at the Montlake Ale House, 2307 24th Avenue E. Starting time is 8:00pm. Some people show up earlier for Dinner.

Can’t make it to Seattle tonight? Check out one of the other DL meetings over the next week. The Tri-Cities chapter also meets tonight. The Spokane chapter and Drinking Liberally Tacoma meet this Thursday. On Monday, the Yakima, South Bellevue and Olympia chapters meet.

With 230 chapters of Living Liberally, including twelve in Washington state and four in both Oregon and Idaho, chances are excellent there’s a chapter near you.

– There are plenty of health and environmental benefits for cities of bicycling.

– So there’s your answer, America. We don’t need gun control. If we all become good Christians and armed ourselves, then when someone opens fire and sends a few Christians to a wonderful place, we can return fire and send them to a terrible place.

– One of the toughest Olympic moments was the fencer who refused to leave the piste.

It’s been a long time coming, and it felt like it was just a matter of time since President Obama supported it. But now it looks like marriage equality has the support to make it to the final platform.

Leaders of the Democratic Party have apparently agreed to include language endorsing same-sex marriage in the party’s 2012 platform, to be ratified at the upcoming Democratic National Convention in Charlotte, N.C.

The formal platform language will be hammered out when the party’s platform committee convenes in Detroit in mid-August.

It has been a lot of work from a lot of committed activists for decades to bring us to this point. And of course there’s still a long way to go before it’s the law of the land in all 50 states. But the tide is turning. If this happens, it’ll be an important step along the way.

– This may be the most ignorant thing anyone has possibly said to anyone ever in any circumstance.

– In addition to all of these points, I’m not sure the leaderless Occupy movement and Bane go hand in glove.

– The settlement between Seattle and the DOJ (pdf). I haven’t read it, but most of the commentary about it sounds encouraging. The proof of the pudding will of course be in the eating.

– Charter school advocates are totally above board.

– Not the Olympics, but a great gold medal.

– And as far as I know, this may be the first time ant babies have been given haircuts for science.

Last week’s contest was won by don. It was the old GST Steel plant in Kansas City, closed after the company was acquired by Mitt Romney’s Bain Capital in the 90s. 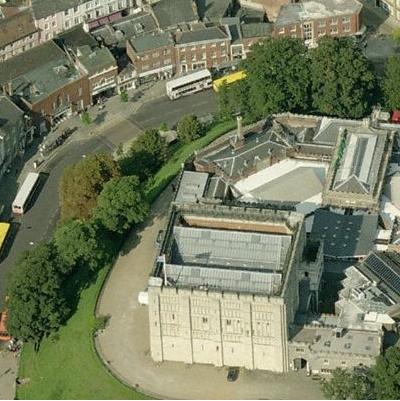 Leviticus 19:19
Breed your livestock animals only with animals of the same kind, and don’t plant two kinds of seed in the same field or wear clothes made of different kinds of material.

Thom with some Good, Bad, and Very, Very Ugly.

Here are all of the answers we got for the primary:

Once again, I emailed the same questions (per position) to all of the Democratic candidates in these contested primaries, and gave them as much space as they wanted to answer. I think we got some interesting ones. Sadly, this time more candidates didn’t answer than did; I don’t normally endorse because who cares, but I’ll say since they were the only people in their races who bothered to answer, the official Carl Ballard endorsement goes to Drew and Tarleton. If they have any sense they won’t put it on any literature. Any candidate who reads this and feels bad is free to get in late, I guess.

So, going forward, is this something you guys would like to see in the general or future elections?

I posted this video to Slog, but my editors deleted it, apparently because it is simply too offensive to objectify a man for his breasts. Huh.

But you know what? Politics is a nasty game. Republicans win all the time by portraying themselves as more manly, but this is one race in which the Democrat, Jay Inslee, has the clear and undisputed manliness advantage. Is it kind to point out McKenna’s man boobs? Is it mature? Is it relevant? Does it add to public discourse? Of course not.

But for some voters, if they perceive McKenna as less manly, it will cost him votes. So for me, this makes McKenna’s boobs fair game.

(Also, what the fuck? Who puts out a political TV ad with video like that? That’s media malpractice.)

Results of a new SurveyUSA poll in Washington’s first congressional district (via KING 5) are out. The poll was taken on the 24th and 25th of July on a sample of 563 likely voters in the district (4.2% MOE). The results:

The best news about this poll is the 43% that Democratic candidates take, edging out Koster’s support at 38% (or 40% if you include Republican-turned-independent Ishmael). In head-to-head general election contests:

If the race were between Koster and DelBene, SurveyUSA finds it’s a dead heat—42% each. It’s also effectively a dead heat if it were Koster vs. Burner.

Of course, with 17% (primary) and 16% (general) still undecided, there is a lot of room for change between the end of the primary and the general election.

While I’m still not thrilled with the fact that CEO’s can do this sort of thing [h/t]. But as long as they can, this is a lot better than them spending it on the bad side of an initiative.

Amazon.com founder and CEO Jeff Bezos and his wife MacKenzie announced a gift Friday of $2.5 million to the campaign to defend Washington’s same-sex marriage law.

With the gift, Washington United for Marriage has raised more than $5 million for the Referendum 74 campaign. Last month Microsoft CEO Steve Ballmer and co-founder Bill Gates each donated $100,000 to support the law.

Dominic Holden on Slog linked to a poll a while ago that suggested that marriage equality might be in trouble. So hopefully this will help turn things around.

There’s a garbage strike in Seattle and the surrounding suburbs. I’m embarrassed to say, I didn’t know the situation before the strike, and it certainly doesn’t look good.

“Waste Management did not come prepared to bargain today,” said Tracey A. Thompson, Secretary-Treasurer of Teamsters Local 117. “We came back to the table to avoid a public health crisis but it’s clear that Waste Management wants to provoke a labor dispute.”

Waste Management has flown in out-of-state strike breakers to prepare for a lockout and has employed staffers from Huffmaster, a company that specializes in lockouts and strikes. “Waste Management is spending thousands of dollars on wages, plane tickets, rental cars, and hotel rooms for out-of-state strike breakers and security guards. That’s money that could be used to match proposals made by its major competitors,” Thompson said.

You can take that with a grain of salt being as it’s the union’s site. But I think it’s important for them to be able to get their side out.

… Late note, the link is old. When I wrote about not being aware of the situation, I thought that covered that it was for background, but re-reading it it looks like a current thing. So just to clarify.

Gubernatorial candidate and former Congressman Jay Inslee released a quite positive introductory ad a couple of weeks ago:

The ad does a great job introducing him and his past service. It’s one of those ads that can build name recognition. That’s all good.

Now compare it to this latest ad that takes a quite different approach:

I like this ad in that it covers some of McKenna’s weaknesses that I have been highlighting recently—namely, his paranoid, vengeful bunker mentality with the press (and here and here) as well as his contemptuous attitude toward others (and here).

At least as a public figure, McKenna is not a very nice person, and this ad begins to needle at that chink in his armor.

The ad also picks up on another theme: McKenna’s statements of being unprepared in a couple of circumstances. This is probably excellent politics, but it isn’t a serious argument against McKenna. From what I can tell, McKenna does take his work seriously and is nearly always prepared.

So, why does a normally prepared candidate have to resort to saying he is unprepared? Quite simply, it allows him to dodge a troublesome question. He doesn’t have to lay out his position on health care reform or on gun control without first carefully constructing an answer designed to minimize any damage from unpopular beliefs he holds.

But, hell, if he is going to use “unprepared” as an excuse for dodging answers, it’s fair game to turn around and hit him for admitting he is unprepared!

– The Stranger endorses the Arena. Although Goldy has some caveats.

– People with power need to stand up to the NRA.

– Countries to root for in the Olympics that have never won a medal.

– The most logical thing said about The Dark Knight. 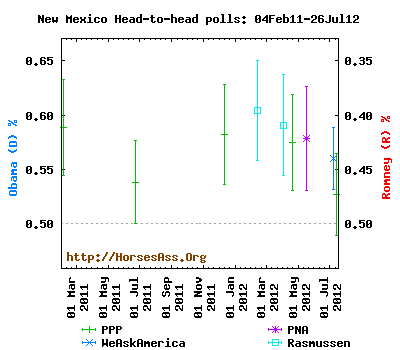 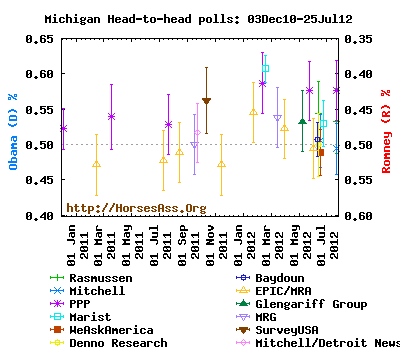 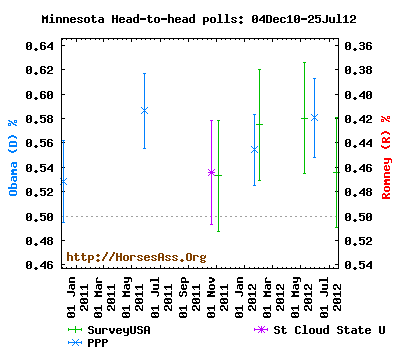 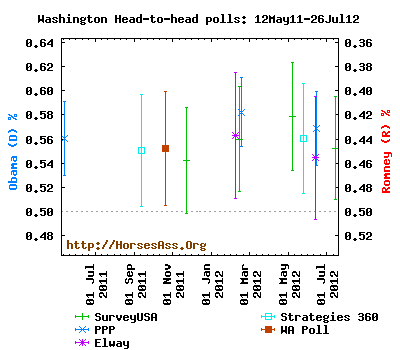 Here is the distribution of electoral votes [FAQ] from the simulations: END_OF_DOCUMENT_TOKEN_TO_BE_REPLACED