First Governor Gregoire and now Rick Larsen have endorsed Suzan DelBene. I’m not sure how much endorsements matter, but these are good ones to have. Her campaign also has raised the most money.

So it seems like the establishment support is coalescing around her. I don’t know if there’s anything other than money that makes her more establishment than Ruderman etc. She’s a fine candidate, and was willing to take on Reichert in a year that was going to be tough for Democrats. If Democrats want to give her another shot, that’s cool. But Ruderman stepped aside in 1998 to clear the field for Jay Inslee, and then actually won an election for legislature.

The main thing seems to be that she can (and has shown she’s willing to) self finance. If she needs the money, the Democrats won’t have to bail her out when Karl Rove spends literally infinity corporate dollars in the district.

It’s about damn time that Obama got himself a bona fide (so to speak) sex scandal. This one did not involve Obama making use of a “human humidor” (as folk musician Eric Schwartz once put it).

Yeah…well now our very own (well…The Stranger’s own) Goldy has a sex scandal…kind-of. The Stranger’s Cienna Madrid has the scoop:

Yesterday, my suspicions were aroused when I overheard Goldy (of all people) bragging about having “sexual relations” with a state senator. The pool’s just not that large, folks.

And denials from Goldy….

Get those taxes in! And then join us tonight for another evening of politics under the influence at the Seattle Chapter of Drinking liberally.

Seattle DL meets every Tuesday at the Montlake Ale House, 2307 24th Avenue E. We begin at 8:00pm, but some folks show up earlier for dinner.

Can’t make it to Seattle tonight? There is also a Tuesday meeting of the Tri-Cities chapter. And the Tacoma chapter meets on Thursday.

With 234 chapters of Living Liberally, including twelve in Washington state and six more in Oregon, chances are excellent there’s one near you.

– I think the usual things that affect the female vote, especially a since of compassion and fairness, won’t be moved by the Good Housewives vs. Dirty Sluts narrative the Republicans are trying to establish.

– Joel Connelly has a great piece summarizing Super PAC’s. It’s mostly info you already knew, but it’s good to have it in one place.

– Okay, Lord Player is clearly the best phrase ever said in any context ever.

– Fuse has a petition for Amazon to stop funding ALEC.

I was at a candidate’s forum for the open seat in the 36th district and it was pretty standard for one of the most liberal districts in the state. They all support marriage equality and an income tax. But one thing that Sahar Fathi said in passing was that we could have a local option income tax. I wish the forum allowed for a follow up on that, but it seems like a reasonable thing to have, but how would it work?

While, I would prefer a statewide income tax, that was rejected at the polls recently, so it probably won’t happen for a while. We can at least enact it in places where it’s popular and either generate more revenue or make the local tax structure more fair. And that money would stay in Seattle or King County.

“Is it a vital interest of the state to have more anthropologists? I don’t think so.”

Scotts “War on Anthropology” was based on an incorrect assumption that there is no job market for anthropologists:

…[T]he difference in job growth between [math and science] jobs and anthropologists is slight. Anthropology jobs are expected to grow by 28 percent, while computer software engineers and environmental engineering technician jobs will grow by 30 percent.

“The expected growth isn’t that much different in terms of percentage,” said Chris Cunningham, an analyst with the Bureau of Labor Statistics.

And then there is this from today’s news:

Jim Yong Kim was chosen to be president of the World Bank, becoming the first physician and Asian-American to head the lender after emerging markets failed to rally around a challenger to the U.S. monopoly on the job.

The World Bank board of directors said today it chose Dartmouth College President Kim to succeed Robert Zoellick, whose term ends June 30. A specialist in HIV/AIDS with a Ph.D. in anthropology, Kim, 52, faced rival bids from Nigeria and Colombia.

Be warned, Gov. Scott, anthropologists will rule the World… Bank.

– Am I the only person who thinks Dennis Kucinich shouldn’t come to Washington to run for Congress, but is fine with it if he does?

– Father Michael Ryan, head of St. James Cathedral, tells parishioners in a letter that gathering signatures for Referendum 74 would “prove hurtful and seriously divisive in our community.” (h/t to Howie on Facebook)

– Bravo! Welcome to the proper side of this debate!

– Kings of the AL West’s second tier is maybe all the Mariners can hope for.

Last week’s contest was won by no one. Apparently, Dana and I have TV tastes that don’t resonate with the HA readers. The view was of Cameron and Mitchell’s house from the show Modern Family, located in Los Angeles, CA.

UPDATE: Last week’s contest was won by Coosboy last night after this was posted. 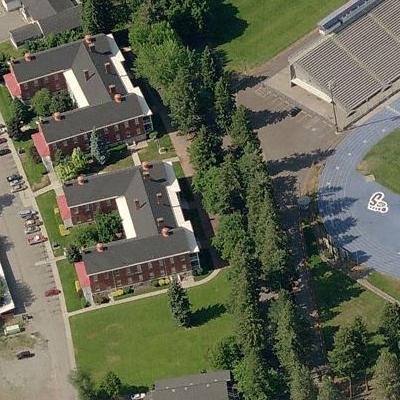 Romans 13:6-7
You must also pay your taxes. The authorities are God’s servants, and it is their duty to take care of these matters. Pay all that you owe, whether it is taxes and fees or respect and honor.

I didn’t speak up.

Mark Fiore: Dogboy and Mr. Dan in “Restrain Yourself”.

Thom with some Good, Bad, and Very, Very Ugly.

Ann Telnaes: The Catholic leadership’s selective use of duct tape.

Thom: Rep. West, not so many Communists…plenty of Fascists.

ONN: Dems say Obama has dicked us around for four years…”it’s our turn”.

The Second Half of the G.O.P. Gladiatorial Games:

The Republican War on Women™:

Jen Granholm: The creators of Texts From Hillary.

Pap: Who is responsible for high gas prices.

Thom: So much more Good, Bad, and Very, Very Ugly.

It’s settled then, Mitt Romney is the inevitable nominee who will carry the torch for Republicans into the general election. So let’s see how he’s doing against President Barack Obama.

Here are the new polls that have been released since my previous analysis two weeks ago:

Many of these polls are entirely unsurprising: California, Massachusetts, New Hampshire, New Jersey, and New York. Maine isn’t a surprise either. But, for the first time this election season, we have Maine Congressional District data that show Obama on track to win all of the state’s electoral votes.

Obama still leads in Pennsylvania, as he has for the previous six polls going back to early February. The Southwest swing states are sticking with Obama, with good leads for him in Nevada, New Mexico, and Colorado. These are states that Bush won in 2004 and Obama won in 2008. Michigan shows no love for a native son—Obama keeps the lead.

The previous analysis showed Obama leading Romney by and average of 347 to 191 electoral votes and a 100% probability of winning an election held then.

Here is the distribution of electoral votes [FAQ] from the simulations:
END_OF_DOCUMENT_TOKEN_TO_BE_REPLACED

If you’re interested in nominating Obama and improving the Democratic platform, Saturday Sunday is the first day in the process.

Those of you who were able to resist attempting mischief in the Republican caucuses and thereby retained your eligibility for the Democratic caucuses can collect your reward this Sunday, as Washington Democrats begin the process of selecting 130 folks to represent us at the Democratic National Convention.

Even though Obama has already accrued enough delegates to get the nomination, it’s nice to be able to voice your support. I’ve never caucused for a winner, so maybe I’ll go just for that. But the other thing is to improve the platform. The big push by activists will be for a marriage equality plank.

I’ll be caucusing Sunday afternoon, and running for delegate to the LD/County level with a pledge to support the nomination and re-election of President Barack Obama and the inclusion of explicit marriage equality language in the county, state and national platforms. I’ll be asking for a similar commitment from those who seek my vote for delegate to any level as the process advances.

If anyone knows of any other planks activist groups are pushing, I’d love to hear about them in the comments. Universal single payer health care and an end to the drug war are two ideas off the top of my head that would probably benefit from a platform fight, but I don’t know of any activist groups pushing for them in the platform.

Anyway, you can find your caucus here. Good luck.

How many of you all have a Swiss bank account?

It’s not too surprising.

State Rep. Roger Goodman (D-45, Kirkland), one of six candidates who announced for the First District Congressional seat being vacated by US Rep. Jay Inslee (D-1)—Inslee, of course, is running for governor—announced today that he’s dropping out of the race. Goodman’s decision comes on the heels of what he himself called an “anemic” quarter of fundraising, which prompted rumors last month that he planned to withdraw from the race.

– Once you write the fragment “it’s based on speculation rather than inside knowledge”, it should be clear that you would be providing your readers with a more useful service if you were to close your laptop, head to the nearest public park, and enjoy the nice weather. Why not do that instead?

– I’ve never thought much about Ashley Judd beyond the blandest adjectives—she’s pretty, she seems nice, her pores look really small—but it turns out she’s also a smart, bold, kickass feminist.

– Who Seattle parks were named after. (h/t)