It’s settled then, Mitt Romney is the inevitable nominee who will carry the torch for Republicans into the general election. So let’s see how he’s doing against President Barack Obama.

Here are the new polls that have been released since my previous analysis two weeks ago:

Many of these polls are entirely unsurprising: California, Massachusetts, New Hampshire, New Jersey, and New York. Maine isn’t a surprise either. But, for the first time this election season, we have Maine Congressional District data that show Obama on track to win all of the state’s electoral votes.

Obama still leads in Pennsylvania, as he has for the previous six polls going back to early February. The Southwest swing states are sticking with Obama, with good leads for him in Nevada, New Mexico, and Colorado. These are states that Bush won in 2004 and Obama won in 2008. Michigan shows no love for a native son—Obama keeps the lead.

The previous analysis showed Obama leading Romney by and average of 347 to 191 electoral votes and a 100% probability of winning an election held then. 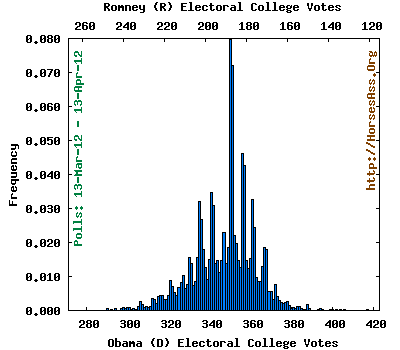