Yesterday’s analysis showed Donald Trump gaining a little over Sec. Hillary Clinton. She had a 99.7% probability of winning an election, and a mean electoral vote of 315.

Since yesterday’s analysis there have been 22 new polls released. The polls feel like they are a little more favorable to Trump. Indeed, now after 100,000 simulated elections, Clinton wins 93,944 times and Trump wins 6,056 times (including the 1,017 ties). Clinton received (on average) 296 to Trump’s 242 electoral votes. In an election held now, Clinton would have a 93.9% probability of winning and Trump would have a 6.1% probability of winning.

I should point out that there is one big change from yesterday. I am now using a 10-day poll window instead of a 14-day window. Doing this tends to nudge each candidate toward 50% probability of winning because sample sizes drop in each state. Additionally, the polls that are dropped are all pre-Comey polls. Clinton has slipped in the last two weeks, so we would expect a 10 day window to be worse for her than a 14 day window. The opposite happens when she is on an up-swing (see the time trend graph below to see both phenomena).

Something else of interest: four years ago tomorrow (Friday), I did an analysis that had Pres. Barack Obama up on Gov. Mitt Romney, 94.4% to 5.6% with a mean electoral vote total of 302 to 236. Essentially, Clinton is running at about the same strength now as Obama was in 2012. One difference, perhaps, is that Obama was starting to gain at this point, whereas Clinton seems to be losing EVs.

There are a few noteworthy shifts from my previous analysis.

Arizona loses two blue polls and a tie. Now all the current polls have small margins for Trump. His chances have gone up from 77% to 97%. 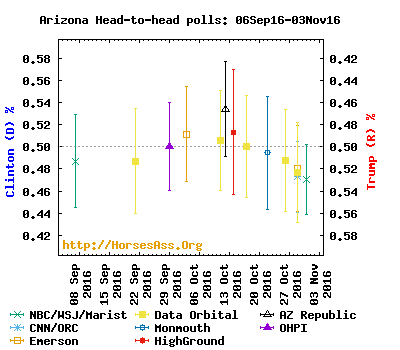 In Colorado, Trump doesn’t lead in any of the current polls. But the small margins for Clinton means that Trump moves from 5% to 21% chances of taking the state.

Florida switches from blue to red, primarily on account of (1) a bunch of pro-Clinton polls being dropped and (2) the addition of a Trump+4 Remington poll. Almost every Remington state presidentail poll I’ve seen this year looks like it is about 3 points skewed toward the Republican. And the firm is a Republican pollster. Still, it seems to be a real, valid pollster. In any case, we went from Clinton at 68% probability of winning to Trump at 58% in Florida. 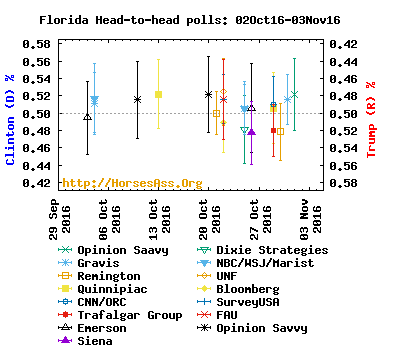 Clinton slips a little bit in Maine, but this is entirely due to a smaller sample size from dropping one of three current polls.

The same thing happens in Maine’s 2nd CD, but now we are left with a pro-Trump and a pro-Clinton poll. Trump’s chances have increased from 44% to 57%. Earlier in the election season, Trump had a solid lead in ME-2. 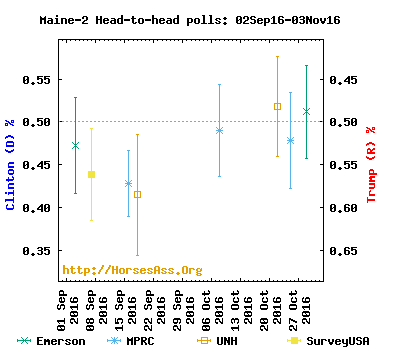 In Nevada, we lost 6 polls, all but one favoring Clinton, and added one new pro-Clinton poll. This gives us four current polls: Clinton+2, Trump+6, Trump+6 and a tie. The Trump+4 poll is from Remington, by the way. This changes Clinton’s chances from 56% yeterday to only 13% today. 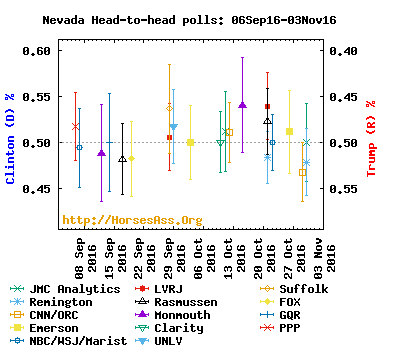 Over the last month, New Hampshire has seen a shift from strong Clinton to about even. Right now, Clinton would be expected to win NH with a 61% probability. 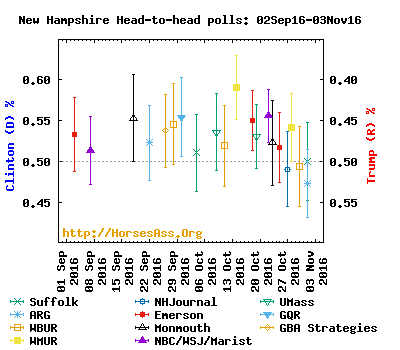 We have lots of new North Carolina polling. While most of the current polls favor Clinton, 3 of the 4 most recent ones favor Trump. One of them is, you guessed it, Remington. In any case, Clinton drops from 80% chance to 53% chance. A toss-up if there ever was one. 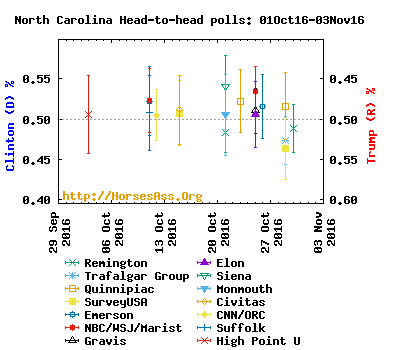 The long term trends in this race can be seen from a series of elections simulated every seven days using polls from 03-Nov-2015 to 03-Nov-2016, and including polls from the preceding ten days (FAQ). 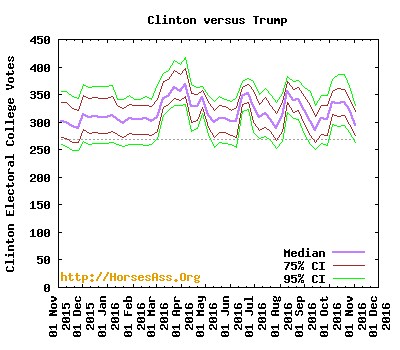 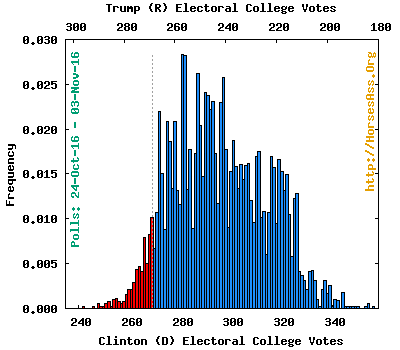