The day of Donald Trump’s acceptance speech is a good time for another poll analysis, I figure. There are 121 new polls added since the previous analysis. A handful of them are newly-discovered older polls, but the majority are newly-released polls. Fifty one of the polls come from a 50-state + D.C. Morning Consult series that was conducted over the preceding three months. The data are newly released, but are not necessarily the most current.

I should mention that only a few polls include surveys conducted this week, and none of them fully cover the G.O.P. convention. So think of this as the pre-conventions baseline analysis. Subsequent analyses will gradually include polls taken after the Republican National Convention. Of course, the same thing will happen following the Democratic National Convention early next month.

As with the previous analysis, a batch of 100,000 simulated elections has Clinton winning 100,000 times and Trump winning 0 times. Clinton received (on average) 338 to Trump’s 200 electoral votes. In an election held now, Clinton would have a 100.0% probability of winning.

Notice, however, that Clinton’s average electoral vote total has dropped a bit from a mean of 354. We should expect at least some improvement for Trump as Republican voters accept and, in many cases, embrace him as the G.O.P. nominee.

In other words, the states are falling into line as we would expect from previous elections. This suggests to me that this will be a conventional election with the battlelines coming down to the battleground states of recent elections. For the moment, Clinton leads in most of those battleground states in the East (PA, VA, NC, FL), Midwest (IA, WI, MI, OH), and West (CO, NM, NV). Of these, IA is very close, but trending toward Trump in the most recent polls, and Florida shows a slight trend in Trump’s direction. 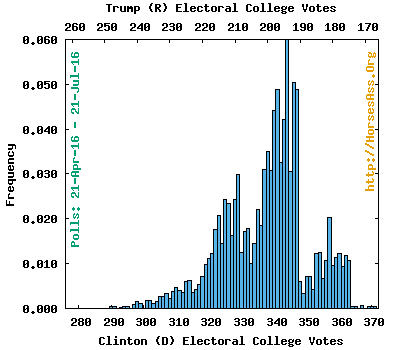 The single most likely outcome for an election held now (or, let’s say, last weekend) is a Clinton victory with 344 EVs to 194 for Trump. That would consitute a landslide.