It has been some time since I’ve done a general election match-up using state head-to-head polls. Way back last October Hillary Clinton held a good lead over Donald Trump and would have defeated Trump with 96.6% probability. But these results were from back in the days when we had few polls matching up Trump and Clinton. We have many more now.

From a analysis of state polls through yesterday, and after 100,000 simulated elections, Clinton takes 100,000 wins. On average, Clinton received 354 to Trump’s 184 electoral votes. In other words, if the election was held now, Clinton would certainly win, and likely in a landslide. 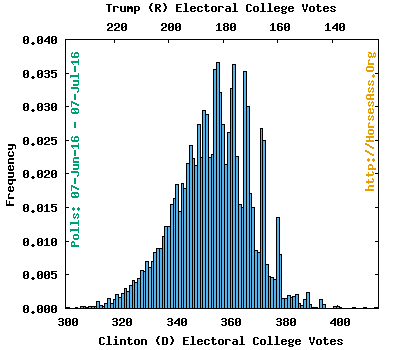 The electoral map for Trump is grim. He loses almost all the swing states: Florida, Virginia, North Carolina, Pennsylvania, Ohio, Michigan, Wisconsin, Missouri, and Iowa. On top of that, he loses Kansas, New Mexico, Arizona, and Kentucky!

The Arizona and Kansas results may be an artifact of one large outlier poll in each state. New Mexico and Kentucky are both based on single PPP polls. Still, Trump can take these four states and still loses handily.

One interesting finding is that Maine splits its districts, although the state goes for Clinton overall.

Today, Donald Trump met with G.O.P. lawmakers, telling them he would put Oregon, Washington, Connecticut and Michigan “in play.” But apparently not. Aside from turning Nevada from blue to red, and one CD in Maine from blue to red, Trump isn’t putting purple states in play at this point. It seems unlikely that solid blue states like Oregon, Washington and Connecticut are going to turn red.

The long term trends in this race can be seen from a series of elections simulated every seven days using polls from 07 Jul 2015 to 07 Jul 2016, and including polls from the preceding month (FAQ). Clearly, Trump has never had more than a small chance (perhaps 15%) of beating Clinton. Even the “rebound” that followed him becoming the presumptive G.O.P. nominee was not much of a rebound and transient. 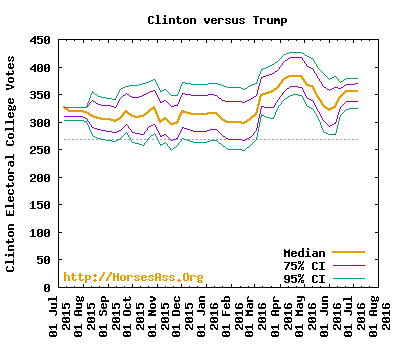