There still too many states that have yet to be polled for this match-up for this analysis to have teeth. I count 27 missing states (plus D.C.) and that number includes the possible swing states of Arizona, Arkansas, Colorado, Maine, New Mexico and more. We have no polls for Washington state yet, but I don’t think Washington is likely to swing in Trump’s direction.

So why do this analysis? Quite simply, because Clinton and Trump are in the undisputed position of leading in their respective primaries.

Even lacking many state polls, this analysis is instructive for the states we have, and for how Trump’s performance compares to the other candidates. A couple of days ago, a similar analysis of Clinton v. Bush showed Bush leading with a 65% chance of winning an election held now. Trump does significantly worse against Clinton than does Bush.

There are a few surprises at the state level. Both Wisconsin and Virginia heavily lean toward Clinton in the two polls in each state conducted within the past month. Now compare those two states to their geographical and political neighbors Minnesota and North Carolina. There we see things nearly tied. In the “classic” swing states, Trump leads in Florida in four of five polls, but Clinton leads in both Ohio polls and in two of three polls in Pennsylvania. Clinton leads in Kentucky, too, but the poll is from way back in mid-June. 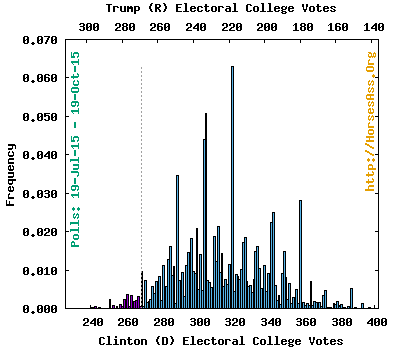