There have only been something over a dozen new state head-to-head polls since the previous analysis of a general election match-up between Secretary Clinton and Gov. Bush. Previously, the race was, essentially, tied with Clinton having a slight edge. This month, the race is, well…tied. But now Bush has a slight advantage.

The trend can be seen from this graph created from a series of elections simulated every seven days using polls from 16 Oct 2014 to 16 Oct 2015, and including polls from the preceding month (FAQ). 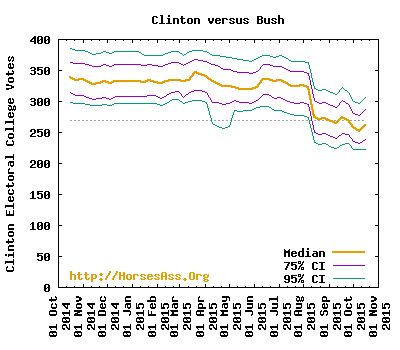 In the month and a half since the previous analysis, the race has remained a tie, with a bounce in Bush’s favor followed by a bounce in Clinton’s favor. There isn’t much we can make of these bounces statistically. All of the data in the recent polls were collected before the Democratic debate, so we cannot even pretend the uptick in favor of Clinton is related to the debate. What is clear, however, is that this past summer, Clinton lost a significant edge she held over Bush. 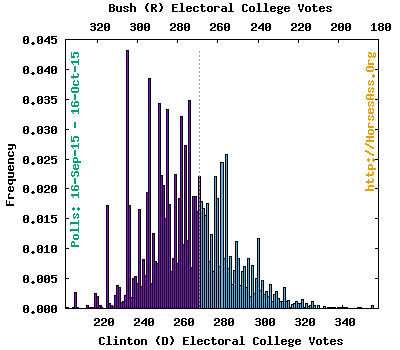