Poll analyses are back! Yes…after about four years of rest, I’ve decided to get back into the poll analysis business. If you are unfamiliar with my analyses, take a look at the FAQ. This is a shakedown run with a new HA template, so feel free to mention quirks or problems in the comment thread.

I’ve started with a match-up between Hillary Clinton and Jeb Bush. I know, I know, it should be a match-up against Donald Trump instead of Bush. The problem is, there are a total of 20 state head-to-head polls available that match-up Hillary and Donald. For Clinton–Bush match-ups at the state level, there are 212 polls. Apparently, pollsters haven’t quite gotten serious about Trump. I expect that most state head-to-head polls will start including him, however.

For the same reason—lack of state head-to-head polling—I cannot really provide analyses for Sanders, O’Malley, Webb, Biden, Warren, Warner, Cuomo, Schweitzer, or any other Democrat (for now). I will, however, do Republicans other than Jeb Bush, because the polling exists.

I remind you that these analyses are driven by state head-to-head polls, not national polls. The state-wide polls are aggregated in a way that emulates the electoral college.

A peek at the long term trend is given after the jump….

The long term trends in this race can be seen from a series of elections simulated every seven days using polls from 31 Aug 2014 to 31 Aug 2015, and including polls from the preceding month (FAQ). 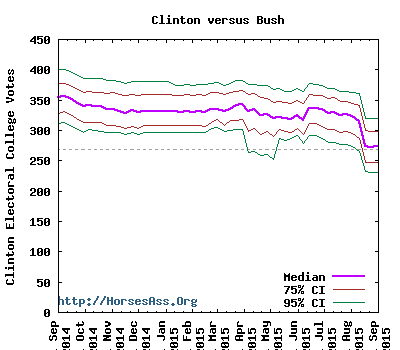 Clearly, until this month, Clinton has maintained a solid lead over Jeb. This is, perhaps, why the media portrays some element of panic among the Democratic establishment (like the largely unfounded rumor that Joe Biden is considering jumping into the race). Is this a reflection of “server-gate”? Or do Democrats spend more of their summer away from phones in national parks and forests? Share your thoughts in the comment thread. (Please remember…the comment threads for these analyses are not “open threads”, so please stay on topic.) 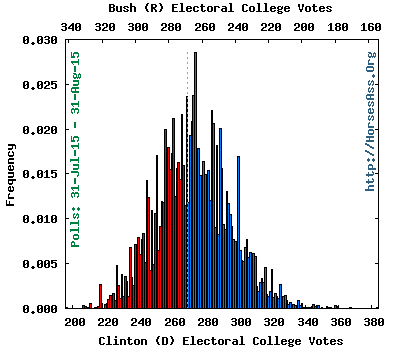 The most likely outcome of an election held today would be a Clinton victory with 274 electoral votes. Of the ten most probable outcomes, Clinton loses in four of them (269 or fewer electoral votes):