We have now had a few days for post-debate polls to trickle out. My previous analysis, four days ago, was almost entirely pre-debate polls. It showed Clinton with a 79.2% probability of winning the election with, on average, 288 electoral votes.

There have been about 20 or so post-debate state head-to-head polls released, mostly in competitive states. The results confirm the general wisdom that Clinton gained the edge from the first debate.

A couple of states showed some interesting changes:

In Colorado one poll aged out and we got two new polls today that both have Clinton up by +11%. This has moved the probability from 51.4% for Trump to 83.7% for Clinton. The state is still quite close, but the magnitude of Clinton’s lead in two polls suggest that Clinton now has the advantage. 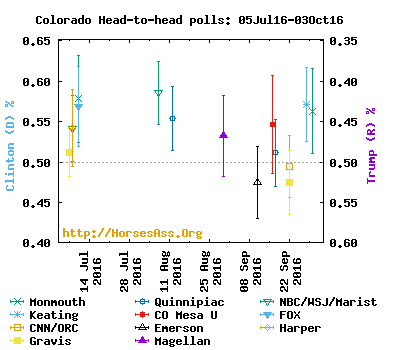 The story is similar in Florida one poll aged out, and three new polls were released, all with Clinton leading. Clinton’s leads, however, are smaller at 4%, +0.2% and 5%. Clinton is leading in 6 of the 10 current polls. Trump had a 60.6% probability of taking Florida 4 days ago, now Clinton is up with a 62.9% probability. The state is still mighty close! 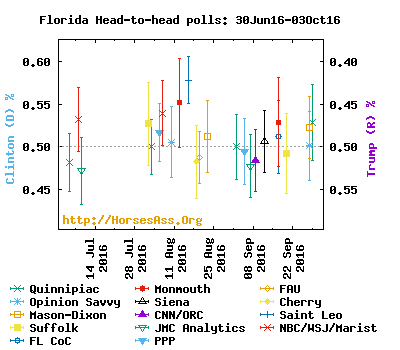 Trump gains a bit in Iowa, not because of any new polls—there have been none since the debate. Rather one poll aged out. Trump leads in 2 of the 3 current Iowa polls. 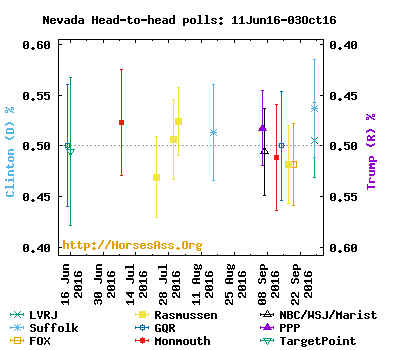 New Hampshire is over-polled because of a competitive Senate race. We lost one poll and gained two new ones in 4 days with Clinton up +6% and +7%. Clinton’s chances go up a bit to a 99.1% probability of winning today.

We have one new poll in New Jersey for a total of 2 polls. This one has Clinton up 6.4%, and so Clinton moves from a 78.3% probability to a 92.5% probability of taking the state.

In New Mexico, one old poll was replaced by a new (but small) poll that has Clinton up +4%. The previous poll had her at +9%. As a result, Clinton’s chances have dropped from 99.4% to 77.3% probability of winning the state now. The polling history suggests that Clinton is very likely to take New Mexico: 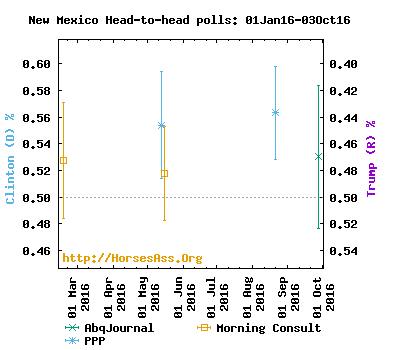 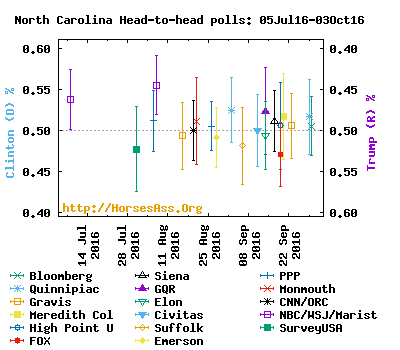 In Pennsylvania we lose two polls and gain one new one. This has tightened the race slightly, but Clinton still has a 94.9% probability of taking the state. The polling history does suggest a tightening of the race, but Clinton leads the last 5 polls by small margins (+4%, +3%, +1%, +2%, +2%). 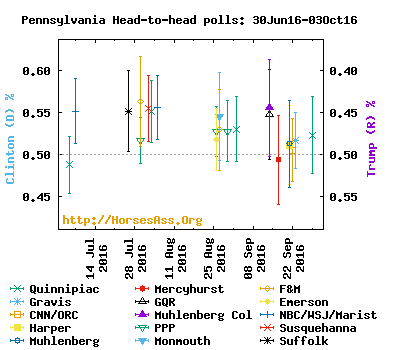 Virginia loses one poll and gains two new ones. Four days ago, Clinton had a 99.7% probability of winning. Today, she takes all but 28 of the 100,000 simulated elections.

The long term trends in this race can be seen from a series of elections simulated every seven days using polls from 03-Oct-2015 to 03-Oct-2016, and including polls from the preceding month (FAQ). As we’ve seen before, Clinton is on the move upward, after hitting a “low” that still had her most likely winning the election.

Of course, things may not continue to favor Clinton. Wednesday is supposedly the “October Surprise” that will un-do her. 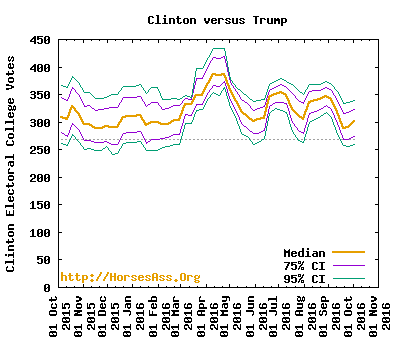 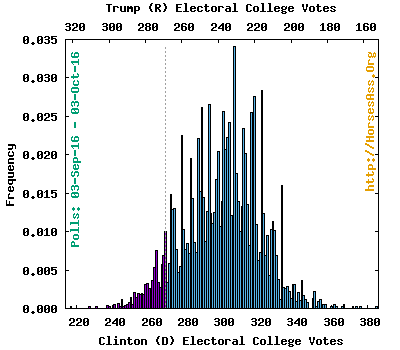