There have been 32 new polls released since the previous analysis on 3 Oct. The polls are largely post-first debate, pre-second debate and have almost all been collected before last Friday’s release of the conversation between Billy Bush and Donald Trump.

For this analysis, I have reduced the window that defines “current polls” to ten days. As the pace of polling picks up, the window will shrink some more.

This is a considerable shift from the 92.5% probability Clinton had in the last analysis. Also her mean electoral vote total has climbed from 300 to 328. That’s quite a jump for one week!

There are a few state changes worth noting.

In Alaska, a new poll has Trump up by only +3%. Previous older polls had Trump with stronger showings (+21% and +14.8%), so this is quite a change. Consequently, Trump’s chances have tumbled from 100% to 71%. I don’t believe Clinton is a serious contender in Alaska, but we only have one small poll for the state, so that is what the available evidence tells us.

Two new Arizona polls don’t favor Trump. We now have three current polls for the state, one has Trump up +2, one is tied, and the most recent has Clinton up +2%. The state is 50-50 (percent) right now. Did I mention that this is Arizona?

The previous analysis had Trump running strong in Iowa with a 93.5% chance of winning. The two current polls have Trump up +4% and Clinton up +0.6%, so Trump’s chances drop to 71.6%.

Nevada is another very close state. Last week, Clinton had a 52.4% probability of winning. The five current polls have one tie, three small leads for Clinton, and one for Trump. Clinton’s chances are pegged at 68.5% now.

One bit of positive news for Trump is in New Hampshire where poll turn-over has favored him slightly. He went from a 0.9% chance to 4.8% chance of taking the state.

Of the nine current polls in North Carolina, Clinton has small leads in the last eight. This raises her chances from last week from 56.7% to 75.3%.

Something similar happens in Texas, where two old poll drops out and one new one is released. Trump goes from 97.2% down to 93.1% chance of winning.

The long term trends in this race can be seen from a series of elections simulated every seven days using polls from 10 Oct 2015 to 10 Oct 2016, and including polls from the preceding 21 days (FAQ). 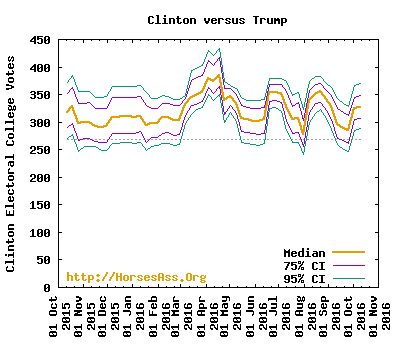 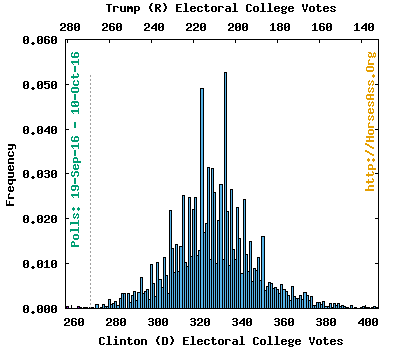