As some of you know, I’m planning to caucus with the Republicans for Fred Karger, by far the least objectionable. Pro choice, pro marriage equality, he’s actually not horrible on a lot of things. But he’s a solid Republican, and so in a general, I’d still prefer Obama to him.

But I don’t really expect him to win. Thus caucusing for Karger is more to send a message to the GOP that no, it doesn’t have to be that way. You can change. That while we can have reasonable disagreements about economic policy, they don’t need to demonize women and gay people.

Anyway, it’s somewhat impressive that Fred got well over 1000 votes in Michigan.

Looks like snow, but not enough to stick. There were a few flurries downtown already mixed in with drizzle. Not ideal biking weather, but I’m trying to bike more, especially with gas prices so high. So what the hell, I’ll be out in it today. Hopefully it won’t be too bad.

And if it is, I’ll just take the bus. I’ve been meaning to write about how nice it is that you can just throw your bike on the front rack and go. It’s such a great freedom to be able to have that as a plan b, and not have to figure out what to do with your bike. I got mine stolen about a year ago, and I’ve been worried about leaving the new one around ever since.

So if we have more than flurries when I’m heading home, or if I just don’t feel like riding, it’s nice to have an alternative.

Tonight could be rather exciting. We may see a long drawn-out battle between Mitt Romney in the Michigan primary. The Arizona primary, also tonight, will almost certainly be a win for Mitt.

As I write this, results are coming in for Michigan. Mitt takes an early, but slight, lead.

5:41: Ron Paul is going into crazy-speech mode on the Politico feed.

5:45: I hate it when politicians (like Ron Paul) say, “we’re broke!” Sorry, nutburgers, you aren’t “broke” unless your debt outweighs your assets and income. As far as I know, no state in this union has such debt. The U.S. certainly does not have that degree of debt.

5:51: Paul’s speech was even too crazy for Politico. They cut it off and replaced it with a boring panel discussing Romney’s “foot in mouth” problem.

6:02: MSNBC calls it for Romney in Arizona. How ’bout that totally genuine Romney endorsement by Gov. Jan Brewer? She and Romney are so, totally, similar.

6:09: Romney spreads it out over Santorum.

6:13: MSNBC: “Romney wins Arizona” (where 0% have reported); “Too close to call in Michigan” (where we actually have results).

6:26: How fucking pathetic is Newt Gingrich? Ron Paul has twice as many votes as Newt [in MI]. Oh, how the gigantic-headed mighty have fallen.

6:38: I think the Republicans should bring Rachael Maddow in as the “White Horse” candidate.

7:07: How fucking pathetic is Ron Paul? Newt Gingrich has twice as many votes as Paul in Arizona. Oh…how the diminutive, crazy-ass have fallen.

7:12: Santorum is doing a speech….something about a “professional mom” and about why he married his wife, Karen (who used to shack up with the physician who delivered her). Santorum mentions that he has seven children. I guess he can do that without Bachmann in the race….

7:18: Damn…Politico has interrupted Santorum’s speech. I really wanted to learn about what, exactly, is the issue with the parts of the U.S. that have experienced population lost. I’m guessing that it has something to do with the evils of birth control.

7:34: Mitt is the projected winner of Michigan. “What a win”, says Romney. It’s his state for fucks sake. The real story is that with 80% of the vote in, Romney is only up by 3%. The word “pathetic” comes to mind.

Please join us Tuesday night for another evening of electoral politics under the influence as we watch the returns arrive from the Michigan and Arizona primaries. Yes…it’s another episode of the Seattle Chapter of Drinking liberally!

We meet every Tuesday at the Montlake Ale House, 2307 24th Avenue E. Our regular starting time is 8:00pm, but feel free to show up earlier than that for the earliest election returns.

I’ll be live blogging the event.

Can’t make it to Seattle? There are also Tuesday meetings of the Tri-Cities and Bellingham chapters. The Tacoma chapter meets this Thursday. And next Monday, there are meetings of the Olympia, the Yakima, and the South Bellevue chapters.

With 229 chapters of Living Liberally, including twelve in Washington state and six more in Oregon, chances are excellent there’s one near you.

– I can’t think of anything more horrifying than Brent Bozell deciding who can use contraception.

– Seriously, what the fuck is wrong with people? (Apparently this was a hoax. My apologies that my bullshit detector didn’t go off.)

– In fairness to Rick Santorum, everything he does makes me want to throw up.

– I’m not sure it was inadvertent.

– The “war” on steroids always has been Kafka rewritten by Lewis Carroll. It is always going to have victims like Ryan Braun — or, worse, some player is guaranteed one day to be the victim of a demonstrably false positive result — because that is the nature of all authoritarian solutions.

It’s not time to hit the panic button yet, but this is certainly a really bad sign.

PubliCola has learned that the Washington State Department of Transportation, which initially predicted it would be able to raise $400 million in toll revenues to pay to replace the Alaskan Way Viaduct with a tunnel, now believes tolls will raise only $200 million, half the original projection.

The $200 million figure comes from WSDOT’s proposed tunnel budget (see page 9), which is currently being reviewed by the state legislature. The revised budget now assumes $702 million in funding from the federal government—$219 million more than the original assumption of $483 million.

As Erica C. Barnett says, so far federal money will pay for this. And if the economy picks up, some of the toll money is likely to recover. So it’s not a showdown between the city and state at this point. But it brings us closer to that point.

Can someone explain to me why the most recent editorial on the Seattle Times’ Ed Page is from February 24?

– If Rick Santorum had his way, I wouldn’t have been able to get that test, and she most likely would have died. Because according to him, tests that give parents vital information about the health of their unborn children are morally wrong. Though he has no medical training, and no business commenting on the medical decisions that women and their doctors make, he argues that such tests shouldn’t be provided, or that employers at least should be allowed to opt out of paying for them on “moral grounds.”

– Shaun has some more on the proposed marriage equality plank for the Democratic platform.

– If the Yes Men have corporate America so afraid, they must be doing something right.

– Nobody expects the vaginal inquisition.

– the female orgasm is a violation of religious liberty.

Last week’s contest was won by milwhcky. It was in Mead, WA. Milwhcky was also able to get the location that I originally cropped but replaced because I thought it was too hard (it was in nearby Colbert).

This week’s contest is related to something in the news from February, good luck! 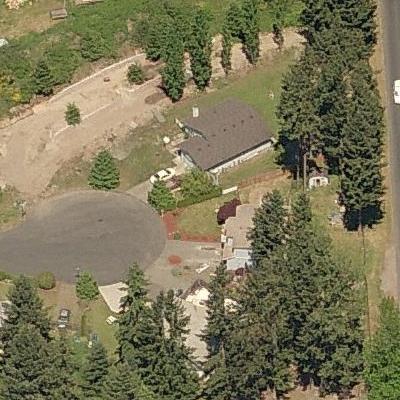 Exodus 22:31
You are to be my holy people. So do not eat the meat of an animal torn by wild beasts; throw it to the dogs.

Thom: Does SCOTUS now recognize that Citizens United was a mistake?

Thom: The Good, the Bad, and the Very, Very Ugly.

Jon: The terrifying prospects of a second Obama term.

Virginia’s “State Rape” and Other Fronts in the Republican War on Women:

Thom: More of the Good, the Bad, and the Very, Very Ugly.

Shuster: Andrew Breitbart is a hypocrite for his silence on rape allegation against James O’Keefe.

Just in case we weren’t quit sure…Public Policy Polling has done a poll in the Senate race between Sen. Maria Cantwell (D-WA) and three potential opponents. The poll surveyed 1,264 Washington voters (2.8% MOE) from 16th to the 19th of February.

Here are the PPP poll findings:

For job performance, Cantwell receives 47% approval and 38% disapproval for a net of +9.

All three of Cantwell’s potential opponents are underwater in favorability. Nevertheless, the measure is meaningless for Baumgartner and Bryant who get “Not sure” from 78% and 85% of respondents respectively. Dino Rossi, for whom 88% of respondents have formed an opinion, receives 38% favorable to 50% unfavorable.

That’s right…Dino Rossi, the man who been the standard bearer of the Washington state Republican party torch since 2004 (and pitchfork since 2008) has a net favorability of -12.

I realize this is kind of old, but the house GOP Budget is called the “all-priorities budget.” I don’t need to go into the specifics: every out of power caucus presents an unrealistic budget that gets ignored. Then they run on, “our budget doesn’t cut education as drastically as their budget. Then never mention that they do that by ignoring all the things they would have had to put back in if they were trying to actually pass a budget. I’m not blaming them for that, if Democrats didn’t control the levers of democracy, their House budget would have tax increases that won’t actually pass, etc. Then not run on the tax increases bit.

But what interests me is the branding here. “All-priorities budget” seems like it was focus grouped to sound great. But here’s the thing: governing, especially in times of uncertainty and cuts, is about picking some priorities over others. The branding “all-priorities” implies that they think you can have it all.

Public Policy Polling has released a new poll on presidential politics taken in Washington state. The poll surveyed 1,264 voters (2.76% MOE) from 16th to the 19th of February.

Mitt Romney’s fortunes have really been sinking in PPP’s look ahead to the fall campaign, to the point where he routinely now performs worse against President Obama than the surging Rick Santorum does. Indeed, in Washington state, Romney not only trails Santorum with general election voters, but also Ron Paul.

Seeing the first gubernatorial poll where Inslee isn’t behind is certainly heartening news. I don’t know if it’s an outlier at this point or if the race has tightened up recently. In any event, for the thousandth time, I’m going to point out that we’re not simply passive observers.

As people who’ve been reading this blog for a while know, I’m a big proponent of getting out and doing what you can for candidates. For citizens volunteering. Knocking on doors and having conversations will be more persuasive than whatever ads get TiVoed passed or mailings that go straight into the recycle bin. And calling people reminding them to vote will push the numbers up.

So, I know I’ll volunteer throughout the campaign. And I hope some of you do the same.