The previous analysis had President Barack Obama leading Gov. Mitt Romney by 344 to 194 electoral votes. Obama’s victory margin was “statistically significant,” as the analysis suggested he would win an election now with certainty.

There were a plethora of new polls released in the last couple of days. So now, after a Monte Carlo analysis using 100,000 simulated elections, informed entirely by state head-to-head polls, Obama wins 100,000 times and Romney wins 0 times. Obama receives (on average) 342 (-2) to Romney’s 196 (+2) electoral votes.

This is two consecutive analyses in which Mitt Romney has gained electoral votes. Is this the end of the Convention bump for Obama? Will Romney be able to keep adding a couple of electoral votes a day?

If so, with 34 days to go, he’d still lose by five—with only 264 electoral votes. In other words, to win, Romney needs to shake loose more than two electoral votes a day, on average, through election day.

That’s the analysis. The big picture in this race can be seen from the time trends from a series of elections simulated every seven days using polls from 03-Oct-2011 to 03-Oct-2012, and including polls from the preceding 21 days (FAQ). 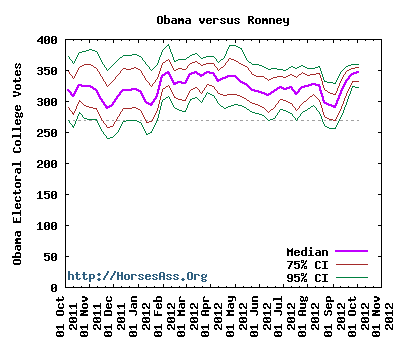 Here are the new polls included:

Romney has a solid lead in Arizona. He leads Obama by +9% in the new poll and also leads in the three other current polls.

Obama has a six-poll streak in Colorado, and he takes seven of the eight current polls.

Obama pulls a hat trick in Florida today. This brings Obama’s streak up to ten consecutive Florida polls. Romney only takes a couple of the earliest of the 14 current polls.

The new Iowa polls goes to Obama by +3.8%. Romney has taken two of the seven current polls and the analysis gives Obama a 99% probability of taking the state (right now).

I was a little surprised that Louisiana has Romney up by only +6% over Obama. The only other poll in the state was from a year ago and had Romney up by +16%.

In Missouri, Romney leads Obama in all three new polls. The four current polls have Romney with a quite solid lead.

Nevada gives Obama a double digit lead over Romney. Aside from one tie, Obama leads in all seven current polls. His chances are, like, 99.5% of taking the state right now.

New Hampshire isn’t a swing state, if you believe the new poll’s +15% for Obama over Romney. That is bolstered by a +7% in another poll. The other five current polls show a narrower spread, and Romney even led in one.

The best news for Romney is the new pack of North Carolina polls. Two have Romney up by +4% over Obama. Obama leads in another by +2%, and the last one is a tie. Combined with the six other current polls, Obama ekes out a 50.1% to 49.9% lead, and an overall 56% probability of taking the state in an election right now.

Ohio has Obama up by +8% over Romney, but with 51%, in one poll and +4% in another. With all nine of the current polls in his favor, Obama has established a solid +6% lead that offers him 100% of the simulated elections.

Two new Virginia polls go to Obama by +2% and +8%. Obama now leads in all twelve of the current polls, giving him 100% chances with about a 6% lead expected.

A new double digit lead for Obama in Wisconsin, and all the current polls go Obama’s way. 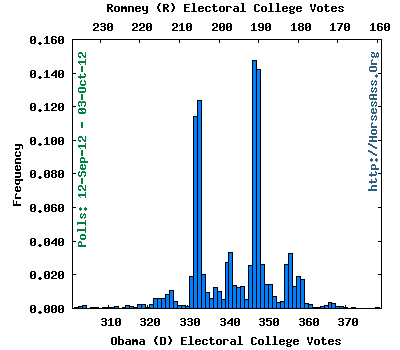 What an interesting distribution! There is slightly greater than 50:50 chance that one of four outcomes would result from an election now: Obama winning by 347, 348, 333, or 332 electoral votes. The results come as pairs one electoral vote apart because of the tie in Nebraska-2.