The previous analysis of state head-to-head polls gave President Barack Obama the lead over Romney by an average of 327 to 211 electoral votes and a 99.6% probability of winning a hypothetical late-July election.

We have lots of new polls weighing in on the situation:

Indiana has been something of a mystery. Obama eked out a win in 2008, and there hasn’t been much polling because the state law makes polling difficult. The new (very small) Rasmussen poll finds Romney with a solid lead.

Missouri is also looking pretty solid for Romney with a +6, +9, and +9 in the new polls.

North Carolina goes both ways, giving Obama a +3% and Romney a +5% lead. Combined with one other recent poll, Obama’s chances in the state are a 53% probability of winning (now): 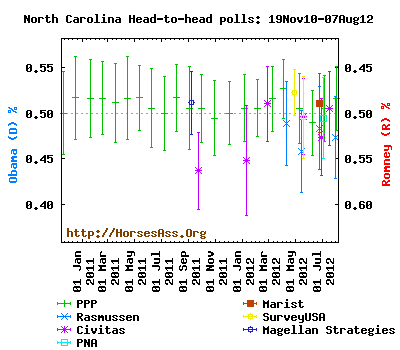 Two Colorado polls give Obama the edge there, with an 81% probability of taking the state.

Florida gives Obama a tiny (+1%) lead. He has now taken three consecutive polls, and four of the six current polls.

Remember when Pennsylvania used to be considered a swing state? It’s pretty hard to make a straight-faced argument that the state will switch to Romney: 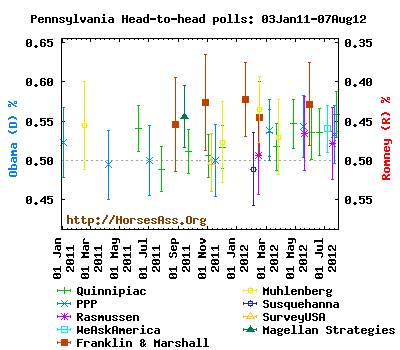 The other swing state, Ohio, gets three polls this week, and all three go for Obama. Here again, Ohio is pretty consistently putting Obama over Romney: 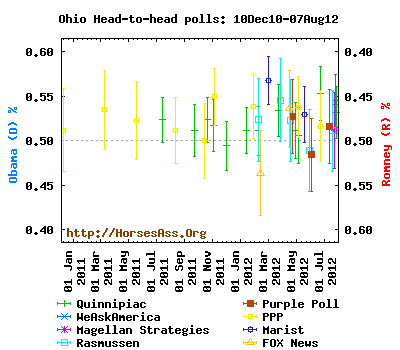 Wisconsin gives Obama a slender +3% lead. This is the fifth consecutive lead for Obama, going back to mid-June. The two polls, taken together, give Obama a 96% chance of taking the state.

Nevada has Obama up by a single-digit (+5%) lead over Romney, but there can be little question about the state now. Consider this: Romney has not led in the last eleven polls. One has to go back to March—March of 2011, not 2012—to find a poll with Romney in the lead.

With this Michigan poll, giving Obama a +6% lead, Obama has “won” three of the four current polls.

Virginia almost matches Florida for being a swing state. This time, Obama takes the lead. Perhaps we can discern a small Obama edge in the recent polling history: 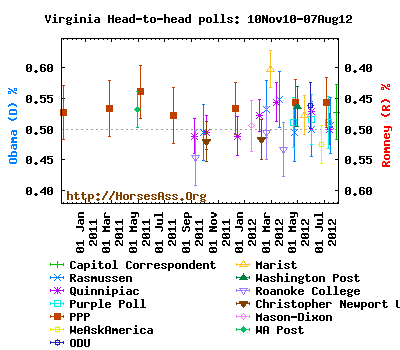 Finally, we have no surprises in Connecticut, New Jersey, and Washington giving Obama the lead. 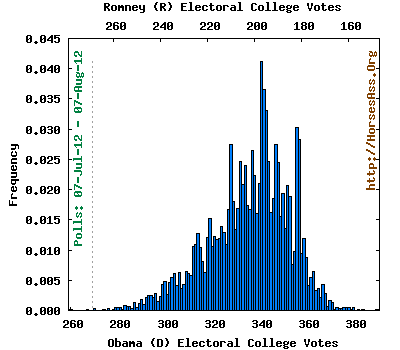