Yesterday the analysis had Sec. Hillary Clinton leading Donald Trump with, on average, 296 electoral votes to 242. And Clinton’s probablity of winning was 93.9% to Trump’s 6.1% chance.

Today there were 19 new polls released. To me, the one noticable thing about today’s batch is that they weren’t that bad for Clinton and not that bad for Trump. You can see the polls and my comments on my Twitter timeline (@hominidviews).

My impression was verified by today’s analysis. After 100,000 simulated elections, Clinton wins 94,164 times and Trump wins 5,836 times (including the 950 ties). Clinton received (on average) 295 to Trump’s 243 electoral votes. In an election held now, Clinton would have a 94.2% probability of winning and Trump would have a 5.8% probability of winning.

In other words, very little has changed from today’s poll dump. This suggests that Hillary’s slide we’ve seen for the past week has hit bottom. If so, she may even make gains in the final four days, as Obama did in 2012.

The long term trends in this race can be seen from a series of elections simulated every seven days using polls from 04 Nov 2015 to 04 Nov 2016, and including polls from the preceding ten days (FAQ). 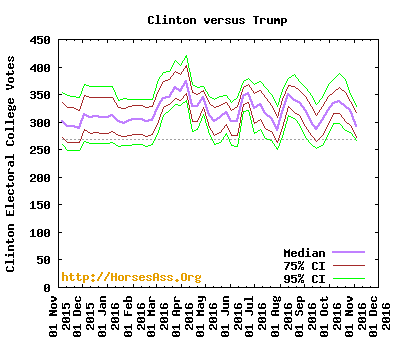 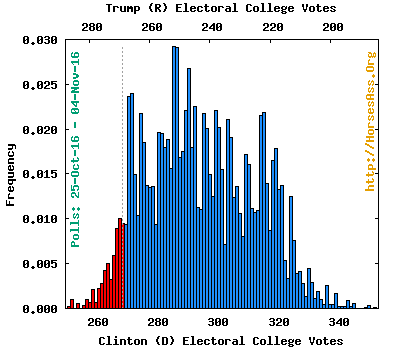