There have been eight new polls released since last week’s analysis, including PA, VA, NV, a pair in GA and a pair in AZ. The previous analysis had Hillary Clinton with a 97.8% probability of winning and election then. Donald Trump had a 2.2% of winning.

There aren’t many changes with only eight polls in six states, but a few are worth noting.

In Arizona, three polls have aged out and there are two new polls, one with Clinton up +2 and the other with Trump up +7.5. The net is a small bump for Trump. This is similar in Georgia, where two new polls (Trump +0.2 and Trump +3) join an existing poll (Trump + 2) to boast Trump’s chances in the state.

We have one new poll in Nevada (Clinton +1) that, combined with two existing polls (Trump +5 and Clinton +4), bumps Clinton’s chances. Trump went from 68% probability down to a 59% probability. Essentially, Nevada is a tie. 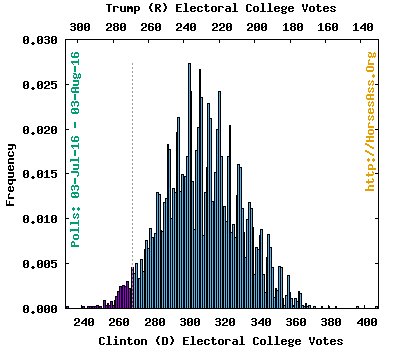 The long term trends in this race can be seen from a series of elections simulated every seven days using polls from 03 Aug 2015 to 03 Aug 2016, and including polls from the preceding 1month (FAQ). 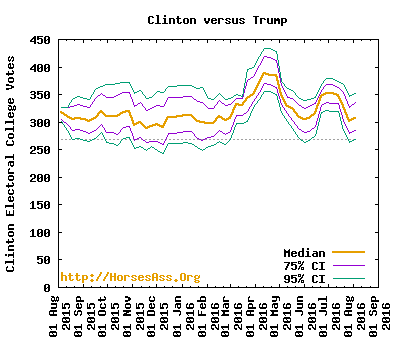