On Friday, my analysis showed Sec. Hillary Clinton leading Donald Trump with a mean of 295 to 243 electoral votes. If the election had been held on Friday, Clinton would have won with a 94.2% probability.

There were only a few new polls released on Saturday. On Sunday a few more were released and I found a few missing from the database. We now have eleven new polls added since the last analysis. Of course, some polls will “age-out” on account of being more than ten days old.

The long term trends in this race can be seen from a series of elections simulated every seven days using polls from 06 Nov 2015 to 06 Nov 2016, and including polls from the preceding ten days (FAQ). 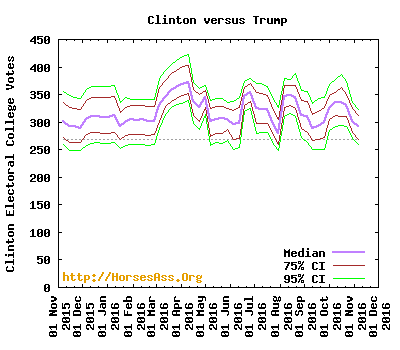 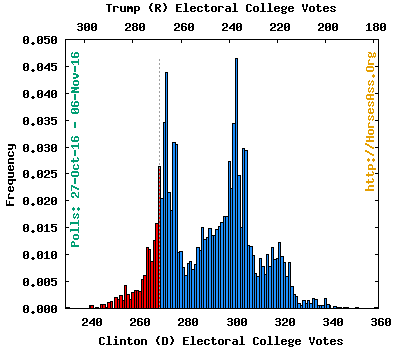 The distribution takes on an interesting bimodal (or even trimodal) form. The major modes at 301 and 272 are caused by the fact that Florida is nearly a toss-up (272 + Florida’s 29 EVs = 301). If tonight was election night, an early call in Florida would tell us whether Clinton walks away with the election or whether it is going to be a long night!

The small variability around the two major modes is largely driven by the fact that New Hampshire is almost a toss-up.

That third mode to the right is largely driven by Ohio, which isn’t quit a toss-up at an 86% chance of going to Trump.