The previous analysis showed Hillary Clinton leading Donald Trump by an average of 309 to 229 electoral votes, giving Clinton a 97% probability of winning an election held then.

There have been 33 new polls released since then, many of them from electorally “interesting” states. So now, after 100,000 simulated elections, Clinton wins 99,315 times and Trump wins 685 times (including the 169 ties). Clinton received (on average) 325 to Trump’s 213 electoral votes. In an election held now, we would expect Clinton to win with a 99.3% probability and Trump with a 0.7% probability.

A number of states are worth examining in more detail.

Florida has a couple of new polls and three polls that “aged out” from the last analysis. One poll has the candidates tied up, and the other has Clinton up +4.4. The net result is that Clinton’s probability of winning has gone from 37% to 67%. This is still very nearly a tie, but the state moves from light red to light blue.

The raw polling results paint a picture of a state that “swings.” 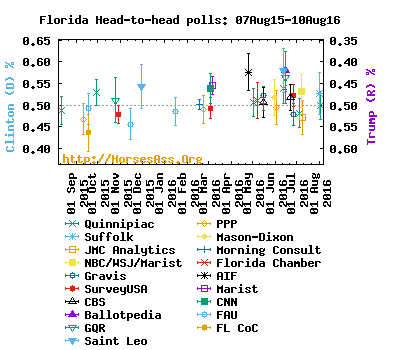 Georgia is quite interesting. Two new polls came out this week with Clinton up +3.3 and +7. The three other polls have Trump up 0.2%, 3.3% and 2%. The net result is that Clinton has gone from a 30% probability of taking the state to a 69% chance. Perhaps surprisingly, Georgia is painted blue.

There is a clear uptick for Clinton in the most recent polls. More polling will be needed to establish whether this is a bump or a real change. 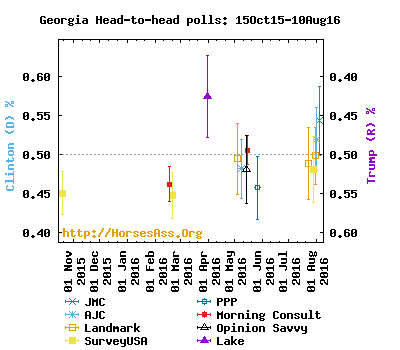 Nevada gains two new polls and loses an old one. The new polls have Clinton up by +2 and +4, increasing Clinton’s chances from 42% to 67%. Nevada goes blue although, like Georgia and Florida, the state is nearly a toss-up. The polling trends look real and in Clinton’s direction but, again, it could be a transient “surge.” 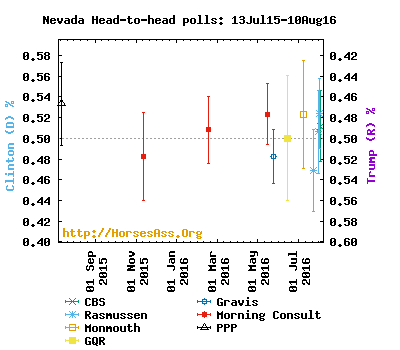 New Hampshire is totally odd. With one new poll added to two previous polls, we have one tie, one with Trump up +9.4% and the newest poll with Clinton up +15. The addition of the last poll drops Trump’s chances from 98.3% to 62%. The variability in recent polls look like a fluke. Clinton used to have a solid lead, but now likely maintains a slight lead in the state. 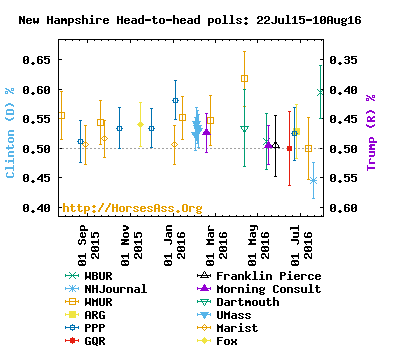 North Carolina moves in Trump’s direction. Two polls age out and two new polls are released, the newest with Clinton up +2 and other with Trump up +4. That second poll was done by Survey USA, and commissioned by Civitas, a right-wing “think tank”.

I rarely bother second guessing polls, particularly from well-established, high-quality pollsters like Survey USA. But this poll is clearly an outlier. The crosstabs show 32% of Black individuals supporting Trump. That is inconsistent with other polls, and just doesn’t seem plausible. 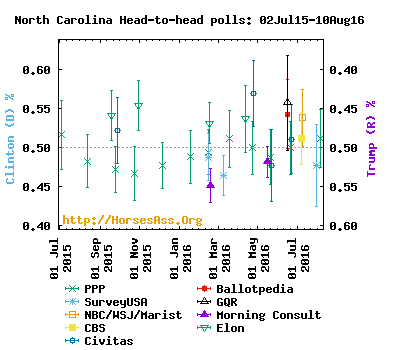 Pennsylvania gets four new polls and loses a couple of older ones for a total of six polls. Here is what they look like, newest to oldest: Clinton +9, +9, +9, +11, +3, and +9. Consequently, Pennsylvania, which people refer to as a swing state despite being reliably Democratic in recent Presidential electinos, would go for Clinton with 100% probability in an election now. 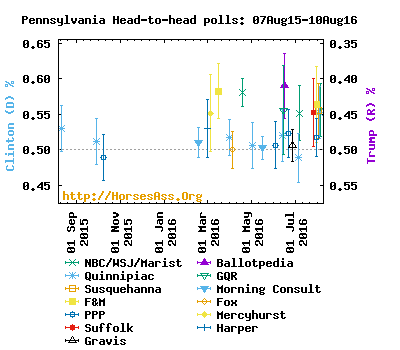 Virginia loses two polls and adds one new poll with Clinton up by +12. The two existing polls have Trump up +4 and Clinton up +5. The net result is that Clinton’s chances have gone up a bit from 82% to 99%. The polling history shows Clinton reliably in the lead, but with the race tightening up in more recent polls. 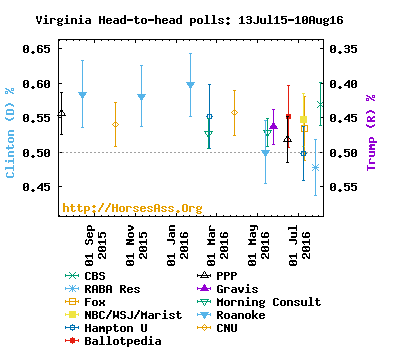 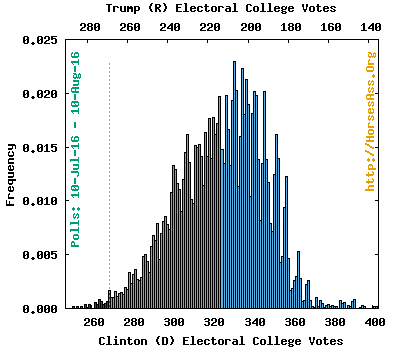 The long term trends in this race can be seen from a series of elections simulated every seven days using polls from 10 Aug 2015 to 10 Aug 2016, and including polls from the preceding 1month (FAQ). 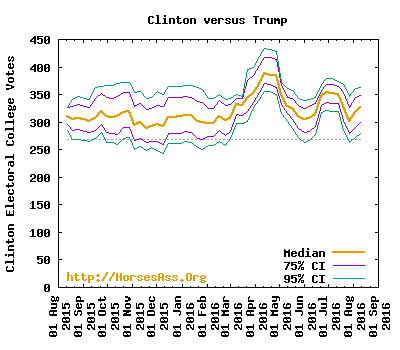