Since last week’s analysis, there have been 22 new polls released in 16 states. We have three new polls in North Carolina, two in Florida, a pair in Michigan, and two in Virginia. Note that I did not include a recent poll from South Carolina because it was commissioned by the state Democratic Party. I explain my inclusion and exclusion criteria for polls in the FAQ.

After 100,000 simulated elections, Clinton wins all 100,000 times. This time, Clinton received (on average) 347 to Trump’s 191 electoral votes. In an election held now, Clinton would have a very close to a 100% probability of beating Trump.

Clinton is now in an extremely strong position. Even if she wins only the “safe Clinton” and “strong Clinton” states (i.e. darkest shades of blue) and loses all of the states that “lean Clinton” or are “weak Clinton” (i.e. medium or light shade of blue), she wins the election with 294 electoral votes. That is, Clinton still wins the election without Iowa, Nevada, North Carolina, Oregon and Ohio. I should add that nobody seriously expects Clinton to lose Oregon; the most recent poll we have in the state is from mid-June, and has Clinton leading Trump by a few points.

A few things have changed since last week that bumps up Clinton’s electoral vote total.

In Iowa and old Docking poll aged out and a new poll was released giving us three current polls. The newest has Clinton up by +2%, one has Trump up by 1.2% and the third is a dead tie. The net result is that Clinton won 57.2% of the simulated elections suggesting she is slightly favored, but statistically, Iowa is a tie. 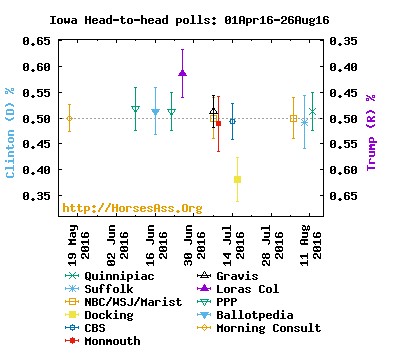 For the previous analysis we only had an old poll for New Mexico that had Clinton up by about 3%. But a new PPP poll in the state has Clinton up 40% to 31% (+9%). Consequently Clinton moves from a 76% probability of winning the state last week to a 99% this week.

North Carolina moves to a lighter shade of blue this week. Last week we had three current polls with Clinton up by +9% and +2% and Trump up by +4%. Three new polls are added this week that has Clinton up +2%, Trump up +10%, and a tie. The net result is that Clinton went from a 91% probability of winning the state last week to an 84% chance of taking it this week. 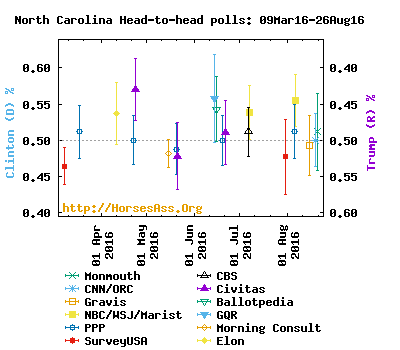 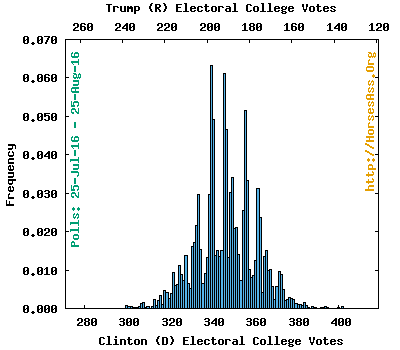 The long term trends in this race can be seen from a series of elections simulated every seven days using polls from 25 Aug 2015 to 25 Aug 2016, and including polls from the preceding month (FAQ). 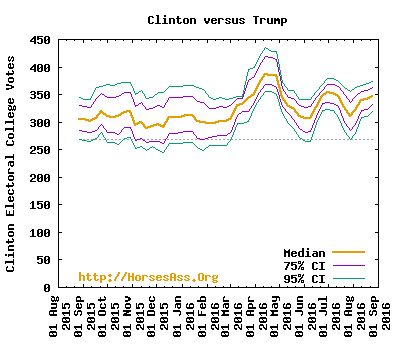