With just over two weeks to elect-a-slate-of-electors day, the race between former Vice President Joe Biden and President Donald Trump is really heating up! If by the phrase “really heating up”, you mean the days are getting shorter, the weather is getting colder, and the polls continue to put Biden ahead of Trump with no signs of wavering.

My previous analysis showed Biden leading with a mean electoral vote count of 363 to Trump’s 175, suggesting that Biden would win an election then with near certainty.

Since that analysis there have been about 135 new state head-to-head polls to weigh in on the contest. Today, after 100,000 simulated elections, Biden wins 100,000 times and Trump wins 0 times. Biden received (on average) 361 to Trump’s 177 electoral votes. In an election held now, Biden would have a greater than 99.9% probability of winning and Trump would have a less than 0.1% probability of winning.

The long term trends in this race can be seen from a series of elections simulated every seven days using polls from 21 Oct 2019 to 21 Oct 2020, and including polls from the preceding month (FAQ). 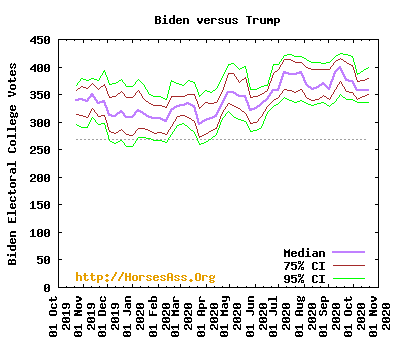 Biden’s lead has held solidly since about July.

Getting back to the current week, here is the distribution of electoral votes [FAQ] from the simulations of elections held today: 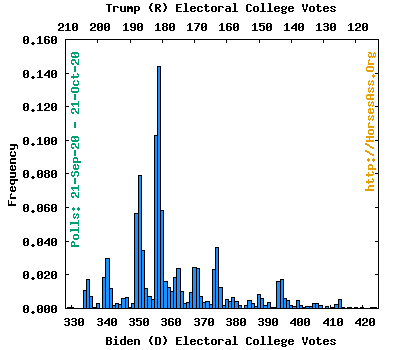