— This is the very definition of insanity!

— I think we should call this “the GOP Cancer Strategy”: “House Republicans will take a carefully orchestrated, staunchly anti-Washington campaign to voters this month, blaming President Barack Obama and his fellow Democrats for Americans’ unhappiness with government.“

— A CEO weighs in: Law promoting STEM education is a win for Washington.

Last week’s contest was won by BA1959. It was the site of the Vancouver hotel (then under construction) where actor Cory Monteith was found dead.

This week’s is a random location somewhere in the world, good luck! 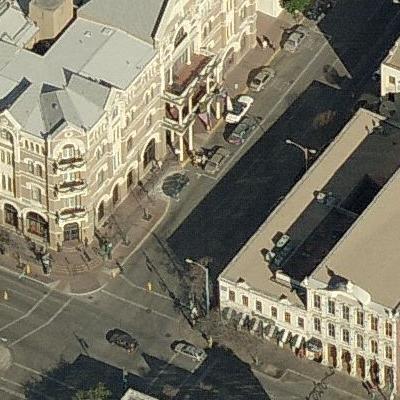 Oh, right … with Carl taking a well-deserved vacation, the rest of us were supposed to step in and take up the slack. So, here I am.

By “here”, at this moment I refer to PHL. I got to the airport well in advance of my return flight to Seatac, and while waiting I’m quaffing a refreshing Yuengling Lager between keystrokes. Unfortunately, their Porter (a longtime favorite of mine) is rather more difficult to find.

I’ve been here in the mid-Atlantic for a week, largely to attend the annual SABR convention. Arriving several days ahead of the meeting, I also visited my brother in Bucks County (about 50 miles north of the city) and my 90-something year old aunt in Dutchess County NY.

The city of my youth is a much nicer place than it once was. Center City is lively, studded with restaurants and bars. Best of all, the convention hotel was immediately adjacent to the Reading Terminal Market, a space not unlike our own Pike Place Market … that is, if the food stalls carried cheesesteaks (wit wiz, of course), hoagies, roast pork sandwiches, pastrami, and such instead of that healthy stuff that populates the vegan-friendly cuisine of Pike Place and Seattle in general.

The principal difference — well, aside from the flavors and aromas — between the RT and PP Markets is that the latter is a venerable farmers’ market saved from the wrecking ball of “urban renewal” whereas the former is an exemplary reuse of a once-decaying anachronism. It’s been decades since you could Take A Ride On The Reading, and the line’s Center City terminal was nearly demolished before it was transformed.

I thoroughly enjoyed my time here in my old stomping grounds, but I’ll be happy to leave the heat and humidity behind. Not that it was unbearable this week, but I know it’s just a matter of a few days before the next bout of 90-90 weather.

Now, which gate do I need to find??

Matthew 5:28
But I say unto you, That whosoever looketh on a woman to lust after her hath committed adultery with her already in his heart.

The vanishing snows of Kilimanjaro.

Bill Maher with some new rules.

Bashir and Eugene Robinson: History shows when Republicans shut down government, they lose.

John Fugelsang: We’re in the golden age of slut-shaming.

Kimmel: This week in Unnecessary Censorship.

Sharpton: How FAUX, O’Reilly, and fellow right wingers are failing miserably in the racism conversation.

Young Turks: Rand Paul and Chris Chrstie duke it out!

Melissa Harris-Perry: Do nothing Congress takes a recess.

Young Turks: The G.O.P. War on Women™ gets expensive.

Thom: Conservatives are driving us to suicide.

Lawrence O’Donnell: The Republican disease of dysfunction in washington.

However, several justices nevertheless expressed concern about the issues raised, saying race is often a factor – conscious or unconscious – when lawyers use their peremptory challenges to dismiss potential jurors from cases.

“Peremptory challenges are used in trial courts throughout this state, often based largely or entirely on racial stereotypes or generalizations,” Justice Steven Gonzalez wrote. “As a result, many qualified persons in this state are being excluded from jury service because of race.”

When lawyers question members of a jury pool in Washington, they can ask prospects to be removed for cause, such as some evidence the juror would not be able to sit impartially on the case. They are also allowed three peremptory challenges, by which they can have jurors removed for no reason at all, as long as the effect is not purposeful discrimination.

Even though the Supreme Court upheld the conviction in this case, this is still a shot across the bow. And hopefully it will lead to actual changes.

I’m sort of already on vacation mode, so here’s a post that (a) is another damn library post and (b) has vacation planning as the intro. Also, (c) the post doesn’t really know what it wants to do and (d) is pretty short, but that’s just me being me. Sorry in advance!

I was at the library trying to find something light but interesting to take on vacation. I looked through the science section, and I came across a fair amount of intelligent design and similar nonsense mixed into the actual science and popular science books. I was rather startled, but I suppose it’s better than them not being available.

To be clear I certainly don’t want to be censorious or to tell librarians how to do their jobs. And if people want to read it, well then I guess it should be at the library. I mean, it isn’t the library’s job to say what books are good and bad science. It’s just surprising to see it.

– It’s too bad that the state’s unions have to justify their existence, but they do a good job of it.

– Everybody get your rotten tomatoes ready, Scott Walker is coming to town.

– Taking pictures is not a problem, and certainly not worthy of escalating a situation, King County and Seattle police.

– I’m on the record in the Hillary Clinton is great camp, but if she runs (and I’m not saying either way) there is going to be a lot of stupid. Even by the standards of the manufacturers of stupid.

– And a heads up: I’m on vacation next week. I may do a few posts, but will probably be more preoccupied with family stuff. Darryl will be around, and maybe the rest of the front pagers.