I was going to push back on the PPP poll that Darryl’s already posted on, citing the DSCC poll that shows Murray up 51-44, are the Washington Poll’s Matt Baretto insisting that PPP doesn’t know Washington state from the other one. But Eli’s already done that on Slog, so you might as well read him.

No, instead I’d just like to use this as an opportunity to emphasize that people who don’t vote really, really suck.

If PPP is right, and there is a huge enthusiasm gap because, what, Obama didn’t enact change fast enough or something, well fuck you. You don’t vote, you don’t have a right to complain about the outcome. Simple as that.

So don’t be an asshole. Vote.

Public Policy Polling has released their final poll of the election season in the Washington Senatorial race. The poll, taken from 29-31 October on as sample of 2,055 likely voters (giving a 2% MOE) has Sen. Patty Murray trailing real estate peddler Dino Rossi 48% to 50%.

While this is only the fourth of twenty polls taken over two months that has Rossi ahead, Rossi has led in two of the past four polls, and Murray has only led in one of them.

A Monte Carlo analysis of the PPP poll shows Murray winning 256,364 simulated elections to Rossi’s 738,506 wins. The poll provides evidence that Murray would win with a 25.8% probability to Rossi’s 74.2% probability. Since Rossi’s winning probability is under 95%, the result is, technically, a statistical tie. But don’t be fooled…Rossi has an advantage by this poll, as is clear in the distribution of simulated election outcomes: 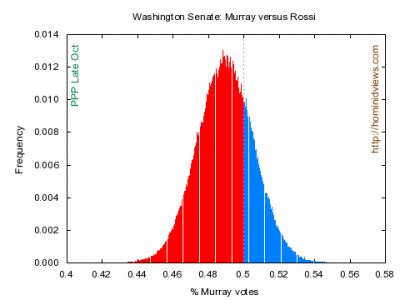 A more complete picture of the election outcome comes by examining all polls taken over the past two weeks. There have been six polls conducted since 17 October until 31 October, and it includes all polls taken since ballots were mailed to most Washington state voters. The metapoll includes 5,371 responses, of which 2,583 are for Murray and 2,582 are for Rossi.

No kidding! They are literally tied as they can be, given the odd number of respondents who chose to “vote.” Can you say “recount!” and “paging Judge Bridges”? I think it is fair to say that this race has seen movement over the past month that has favored Rossi in dissolving Murray’s clear lead.

I’ll end this post with the raw polling picture over the past two months. In a race so close, different people will squint at this graph, view it through different ideological or partisan filters, dump polls they don’t “like”, and come to different conclusions. In fact, this race is, based on any individual poll or based on every poll taken in the past two weeks, utterly indistinguishable from a tie. 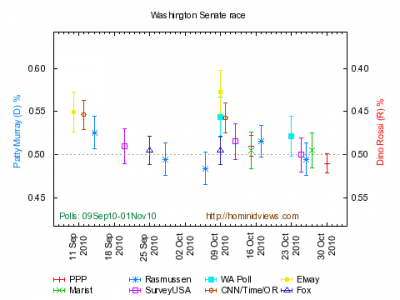 Yeah, that’s former Reagan budget director David Stockman despairing over his fellow Republicans’ “anti-tax religion,” and watching last night’s 60 Minutes piece on I-1098 has me despairing too. Of course, the anti-tax mantra is a religion, and a fundamentalist one at that.

And apparently, there’s no reasoning with faith. 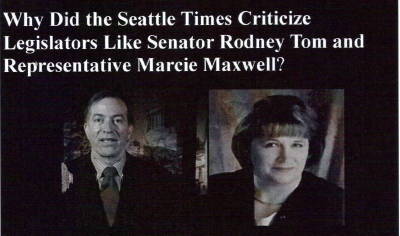 If only our government operated as efficiently as the private sector, I guess it wouldn’t know the name of its own legislators either.

The hit piece above, mailed to 41st LD voters (click through to see the whole piece), is not only dishonest in its message (far from criticizing her, the Seattle Times actually endorsed Rep. Marcie Maxwell), but it also stupidly names the wrong state senator. Of course that’s 41st LD state Sen. Randy Gordon’s picture, yet the mailer twice names 48th LD state Sen. Rodney Tom.

Adding to the irony is that the hit piece was paid for by Americans for Prosperity, New York billionaire David Koch’s far-right, ultra-conservative, faux-think-tank front group dedicated to privatizing Social Security… because, you know, the private sector is always more efficient than government. Or something.

Yup. These are the kinda folks I want handling my retirement account.

But then that’s just par for the course in this election isn’t it? An out-of-state billionaire funneling money through a secretive front group into a legislative race for chrisakes, against a local Democrat whose name he can’t even bother to learn. That’s American democracy for ya.