So at 10:20 pm, the official Secretary of State election web site has Gov. Chris Gregoire ahead of challenger Dino Rossi by 51.75% to 48.25%. You can track things at the vote.wa.gov website yourself if you wish.

I’ve just returned from the Democratic Party ballroom at the Vancouver Hilton, a festive and at times weepy scene. The crowd roared when Obama was declared the winner, and watched his speech with rapt attention. People I didn’t know were hugging me.

One kind of strange thing was that the Republicans were in a nearby ballroom, and I noticed several police officers standing in the corridor in between. Fortunately I saw no signs of Republican depravity that would necessitate police involvement.

A couple of 17th LD Legislative races in Clark County bear mentioning. In the race to succeed disgraced Republican Jim Dunn, R-Vancouver, who was stripped of his committee assignments by Republican leadership after making a denigrating remark to a staffer, Democrat Tim Probst is cruising to an easy victory with nearly 57% of the vote. So add one for Frank Chopp’s uber-majority.

In a nail-biter, Democratic challenger David Carrier is ahead of incumbent Republican state senator Don Benton by a scant 50.11% to 49.78%. That’s a tough lead to hold on to if the daily totals break for Republicans, as they tend to do, but Carrier is still in contention and is to be commended as a newcomer for his fine effort. It’s not over and I sure hope Carrier hangs on somehow.

Get used to it.

No more “bi-partisan” trips to Iraq.

“President Barack Obama.” Get used to it, righties.

Obama is leading McCain 175 electoral votes to 70.  And McCain’s home state of Arizona is “too close to call.”  Kick ass.

I know it’s early, but so far McCain is kicking Obama’s ass, 16 electoral votes to 3.  It’s a landslide.

Media Plus secures ad time on credit which allows its clients–political candidates in this case–to run ads without paying first. It’s a pretty sweet set up for campaigns, which typically don’t have much cash on hand in the final days of a race. The Media Plus deal conceivably allows the Republicans to get on TV when they don’t have the money on hand to pay for it. For example, according to Rossi’s most recent campaign finance filing, he was $203,030.83 in the red, yet he had $700,000 worth in media buys running during the last week of the campaign.  (Rep. Dave Reichert, who also uses Media Plus,  appeared to be getting ad time without the cash to cover it as well.)

The Democrats contend that the advance amounts to a contribution. Rossi did over $6.5 million in business with Media Plus. McKenna did nearly $800,000 in business. And Sutherland did about $320,000.

Let me repeat the first line of this post: The Public Disclosure Commission sent a letter to the Washington State Democrats today.

That said, the early exit polls that seem to be making the rounds have Obama up 4 in PA, up 2 in Virginia, up 1 in Florida and Ohio, and down 2 in North Carolina.  It’s pretty meaningless, yes, but there’s really not much else to report right now, so what the hell.

FYI, I’ll start blogging live from the Montlake Ale House at around 4PM.

Looks like turnout is heavy in Clark County. Which was already known because of mail in voting, but it sounds like people are coming out in large numbers to do things like get ballots because they have moved. From The Columbian:

“There were people showing up before 7,” said Elinor Perlich, an election worker manning a drop-box at Image Elementary School in northeast Vancouver.

Many of the 33 drop-box locations reported having to empty ballot boxes into plastic totes, filled with hundreds of ballots coming in on Election Day. Many voters who have moved since the last election headed to the Elections Office at 1408 Franklin St. to pick up fresh ballots.

Not quite the same as standing in line to vote, but clearly the enthusiasm is there. The weather down here has been chilly but while doing errands for part of the day I never got rained on.

An anti-Gregoire email has been making the rounds since the weekend, and has apparently gone viral in the agricultural community.  The email falsely characterizes the governor’s record on water issues, and touts an anti-Gregoire rally that never happened.

YAKIMA, WA – Over 100 Farm Bureau members braved strong winds and heavy rains to hold a rally in Yakima on November 1st to protest against Governor Christine Gregoire and her lack of support and action in building water reservoirs in Eastern Washington during her first term in office.

In particular, the Farm Bureau members at the rally expressed strong dissatisfaction at Governor Gregoire for her lack of leadership on several issues…

[…] During the rally, the Farm Bureau members chanted “Jay Manning must go!” in reference to Department of Ecology Director Jay Manning.

Nearly all of the farmers at the rally indicated that they would now be supporting Gubernatorial Candidate Dino Rossi because of the lack of action that Governor Gregoire and Ecology Director Jay Manning have shown in regards to building water reservoirs in Eastern Washington.

The email even includes pictures, presumably taken at the rally: 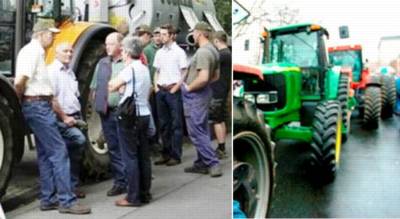 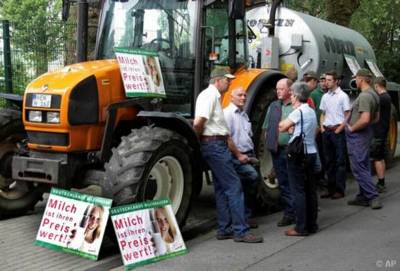 Dino Rossi couldn’t actually generate much support from farmers in central Washington, so he had to fabricate it.  Pathetic.

Sandeep Kaushik, Darcy Burner’s communications director, was rushed to the emergency room this morning with what turned out to be a sizeable kidney stone… a non-life threatening, yet extremely painful condition.  His primary responsibility being interacting with our local media, Sandeep has perhaps the most stressful job in the Burner campaign, and I suppose this is what comes from a steady diet of cigarettes and Maker’s Mark.

Of course, as far as the ill health effects of stressful campaign work goes, I suppose it could be worse.

Get well soon, Sandeep, and remember, like the election, this too shall pass.

2. We can finally start to criticize the guy.