I was driving my daughter to school this morning when we heard something on KUOW about a “Clown County man.”

Of course, they probably said “Clallam County,” but both my daughter and I heard “Clown,” and it got me thinking… wouldn’t it be cool if Washington state really did have a Clown County?  Not just in name, but a county that embraced the entire clown theme the way Leavenworth embraces its faux Bavarian heritage.

Though if we did, I’m guessing it would vote Republican.

Darcy Burner lost ground after yesterday’s ballot dumps, and now trails Dave Reichert by about 1,800 votes, with about half the ballots counted.  And of course, that’s a very discouraging trend.

That said, it may not represent a trend at all, as at the moment we have absolutely no idea where these ballots came from, either geographically or temporaly.  These could be early absentees. These could be recent arrivals.  These could be a random sample.  Your guess is as good as mine.

For those following the results from outside Washington state, it is important to remember that unlike neighboring Oregon, ballots must merely be postmarked by election day, and they’ll continue to arrive for days.  So once (if?) King and Pierce counties catch up with the ballots on hand we’ll have a much better idea of the status of this race.

Outstanding. Sarah Palin did not know that Africa was a continent, not a country…

Also, Radley Balko points out a sadly ironic statistic out of California. While African-Americans celebrated an unprecedented milestone in their centuries-long struggle for equality, African-American voters overwhelmingly voted for Proposition 8 to ban gay marriage.

If you decide to run against in 2012, please have this man help you come up with good ideas again.

In Clark County’s 17th District, state Senator Don Benton, R-Vancouver, has pulled narrowly ahead of challenger David Carrier in today’s count. Benton leads 50.22% to Carrier’s 49.67%. It’s a margin of 269 votes. Carrier had led by about 150 votes on election night.

Unfortunately for Carrier, for whatever reason, as the counting goes on Republican totals always seem to improve. It’s not over until it’s over, and a mandatory recount certainly seems possible, but obviously today’s count would seem to bode well for Benton’s chances.

Whoever “they” are, just called the Oregon Senate race for Jeff Merkley.  Congratulations Jeff.  (And congratulations Carla and Sarah.)

The name “Lisa Brown” has popped up in the recently released list of Obama’s transition team, and at least one diarist on Daily Kos has identified her as our Lisa Brown, Washington’s State Senate Majority Leader.

Huh.  You’d think that would be bigger local news… something she’d want to promote a bit… so I called state Senate Dems communications director Jeff Reading, and he says that’s the first he ever heard of the story.

So while it would have been cool, apparently not.  Too bad.

I wish it was me, but alas, I haven’t heard from them. The closest I have been to the campaign (besides endorsing early) was meeting the President-elect in Seattle  and meeting and introducing Michelle Obama in Spokane.

Yeah, well, that’s closer to Obama than I ever got.

This past election cycle, [the BIAW] spent between $1.7 million and $1.8 million, mostly in support of three candidates: Republican gubernatorial hopeful Dino Rossi, Republican Attorney General-elect Rob McKenna, and conservative state Supreme Court Justice-elect Jim Johnson. Erin Shannon, the BIAW’s public relations director, is thrilled with the results: “It was a big ‘Fuck you!’ to all the liberals out there.”

Hey Erin… after pissing away over $7 million in the governor’s race, imbuing your illegal smear campaign with the BIAW’s own nasty and dishonest spirit, only to see your boy Rossi get trounced by an 8 to 10 point margin… exactly who is getting their ass kicked these days?

Burner kicked off her campaign in May by publishing a plan to end the war in Iraq.

In fact, Darcy kicked off her campaign the previous year, and the Responsible Plan was actually published in March. Heffter and the Times may not have been paying any attention to Darcy before May of 2008, but that doesn’t mean her campaign didn’t exist.

Geez… if the Times can’t get simple things right, like, you know, undisputed facts, then how can we trust their reporting on anything?

UPDATE:
In the comment thread, Daniels asks if Heffter is “lying.”  Hmm.  I dunno… maybe it’s just an exaggeration?

Rummaging through the CNN exit poll results for the gubernatorial race, which starts here, some folks might be interested how many of those vaunted Obama-Rossi voters there really were. (It’s on page three.) In this poll, the answer is 14% of Obama voters supported Rossi. Six percent of McCain voters supported Gregoire.

So now you know.

Late word as I’m writing this post–AP is reporting Rossi will concede at 11:30 AM.

Yesterday, we won nearly every race in which I was emotionally invested… the governor’s race, the statewide ballot measures, most likely Peter Goldmark, and of course, the White House.  Everything except for Darcy Burner in Washington’s 8th Congressional District.

At this point Darcy is trailing Reichert by less than one percent of the vote, but there are tons of ballots left to count, so I really can’t predict this one way or the other.  What seems clear is that Darcy did very well with the early absentees, and Reichert did very well with poll voters.  That shows a clear trend in Reichert’s favor that we can mostly attribute to the rank partisan work of the Seattle Times and their decision to assist Reichert in smearing Darcy’s educational record during the final weeks of the campaign.  And that’s simply pathetic.

That said, both camps should be very nervous right now.  Later today, and possibly tomorrow, after more early absentees are counted, Darcy will likely regain the lead… and then over the next few days, as the late absentees are added to the tally, that lead will likely slowly ebb away.  To what degree either of these predictions hold true, if at all, depends on turnout and the partisan composition of yesterday’s electorate, neither of which we know enough about yet from the ballots that have been counted in the district thus far.

What I can say in that regard is that looking at the governor’s race the statewide electorate appears to have trended at least somewhat more Democratic than the pollsters had predicted.  And that gives me reason for hope.

As Republicans survey the smoldering wreckage of the party of Lincoln and the inevitable reassessment occurs, here’s some free advice for them: stop lying about everything.

I don’t mean spinning and fudging and trying to put a good face on your policy positions. I mean stop lying as a first, middle and last resort about every last damn thing under the sun.

If you think a specific tax proposal is a bad idea, just explain why, don’t paint anyone and everything who might think it is a good idea as a communist. Don’t call birth control abortion. Don’t paint opponents as lovers of sex offenders. If your opposition is pointing out that the Constitution needs to be upheld, don’t call them terrorist sympathizers. If Americans are concerned about the economy, don’t try to blame people who were in office 30 years ago.

Stop lying. If you can. If you can’t, you will never come back as a meaningful political party. 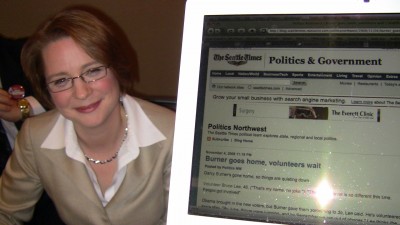 ABC, CBS and CNN have called the governor’s race for Chris Gregoire.

Four years ago I cut my teeth as a blogger defending the legitimacy of Gov. Gregoire’s election from the mean spirited and misleading attacks of Stefan Sharkansky and the (un)SoundPolitics crowd, and while she ultimately won at the polls and won in the courts, she lost in the court of public opinion.  So had Dino Rossi won this rematch, largely on the strength of the lies spread during the election contest, Stefan would have won and I would have lost.

Yeah, I know… I’ve once again personalized an election, but hell, if that’s what it takes to motivate me, that’s my business.  I’ll post some more cogent commentary tommorrow, but for the moment all I know is that I kicked Stefan’s ass, and that’s a sweet victory in itself.

Burner leads in the “fake America” King County portion of the district, while Reichert holds a lead in the smaller but much more “real America” Pierce County portion.