The poll finds Inslee and McKenna tied at 42% each, with 16% undecided.

With a tied result, I won’t even bother with a Monte Carlo analysis…each candidate would win about half the simulated elections.

The SurveyUSA poll and the new PPP poll cover a continuous range of dates, from Feb 13th to the 19th, lets pool the results of the two polls and do a Monte Carlo analysis. After a million simulated elections using the two polls, Inslee wins 150,944 times and McKenna wins 845,007 times. In other words, an election held now would result in a win for McKenna with a probability of 84.8% and a win for Inslee with a 15.2% probability. 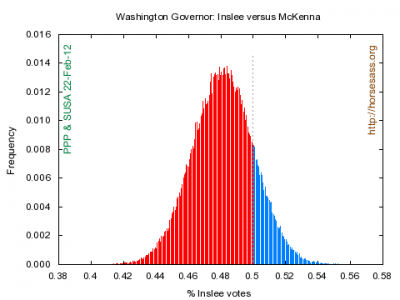 The cross-tabs in the PPP poll suggest that Inslee may have a little more to gain from the undecided vote. McKenna’s has captured much of his base, with fewer undecideds among groups that tend to support him. Inslee’s support seems less solid, but that means he has more potential to win over undecideds. A positive sign for McKena is the Independents, who go for him over Inslee, 43% to 31% with a non-trivial number of undecideds.

There were a few of other interesting items polled.