My previous analysis, some 2.5 weeks ago, showed control of the Senate in the hands of the Republicans with a 70.5% probability and a mean of 51 seats. We have had a plethora of new polls since then, and we have seen a big change at the top of the ballot.

Where have the changes come?

First, is Illinois, where we didn’t have much polling before. A new poll has Tammy Duckworth (D) leading Mark Kirk (R) by an astonishing 14.4% in a four-way race. Illinois moves from 81.1% chance to a 99.8% chance of electing the Democrat.

In Indiana, where Democrat Evan Bayh is up against Republican Todd Young, we have but a single current poll that has Bayh up +1%. The previous poll had Bayh up +4%, so the Democrat’s chances have dropped from 77.2% to 56.2%–just about a tie. 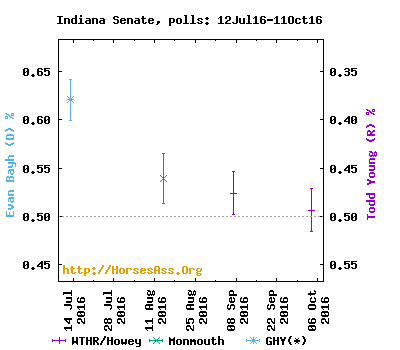 We have no new polling in Missouri, where Democrat Jason Kander is challenging the incumbent Sen. Roy Blunt (R). But two older polls have dropped out and we are left with one Emerson poll with Kander at +2%. Blunt’s chances have dropped from 97.4% to 35%.

New Hampshire has been a back-and-forth race between Democrat Maggie Hassan and Sen. Kelly Ayotte (R). Ayotte led in the last analysis with a 56.5% probability of winning. Five polls have aged out and four new one have been completed. Now she is up to 68.6% probability. 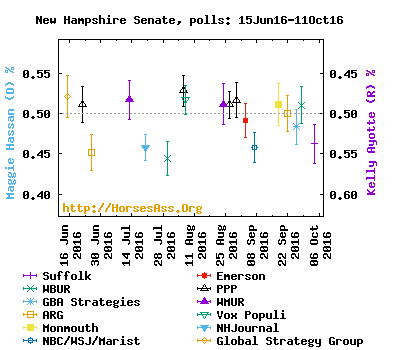 In North Carolina, Democrat Deborah Ross is challenging Sen. Richard Burr (R). This race has seen a significant shift in the polling and Burr’s 91% probability of winning has changed to a 61.1% probability for Ross. 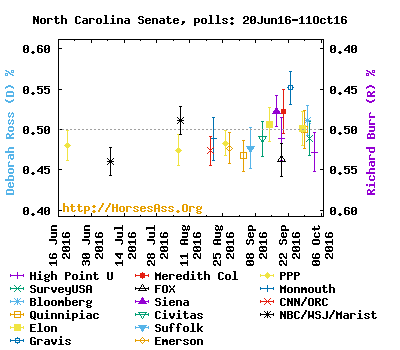 Pennsylvania is another state where an incumbent is endangered, with Democrat Katie McGinty leading Sen. Pat Toomey (R). Previously she had a 78.3% probability of taking the seat. The loss of five polls and the gain of seven new polls have shifted this a little, and now KcGinty has a 68.7% chance 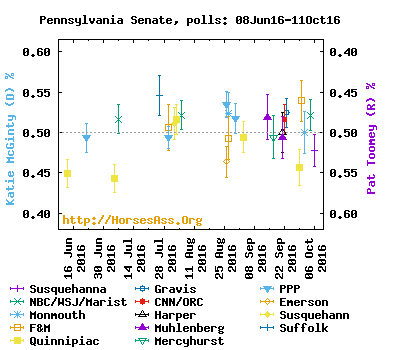 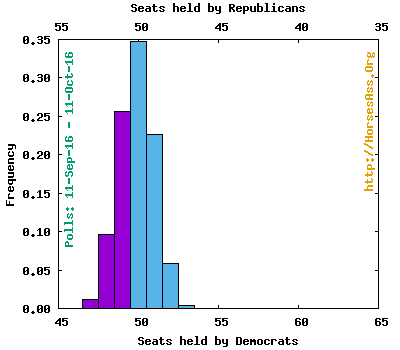 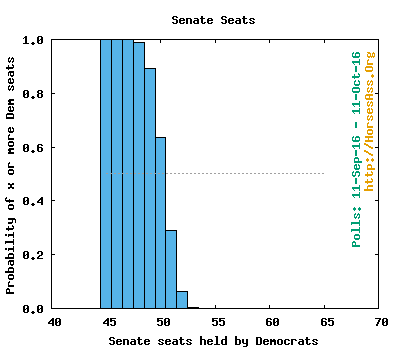