The previous analysis from 4 days ago showed Sec. Hillary Clinton ahead of Donald Trump, with a >99.9% probability of winning an election last week. Clinton’s mean electoral vote total was 335 and Trump’s was 203.

There are a few things to highlight for this analysis.

Two new polls have come in from Arizona, and Clinton leads each. The oldest poll is a tie, and the newest three have Clinton at +2%, +1%, and +2%. This slight lead has slightly raised Clinton’s probability of taking the state from 60.8% to 65.8%. This is barely better than a tie, but the fact that a Democrat is leading in Arizona is nothing short of remarkable. 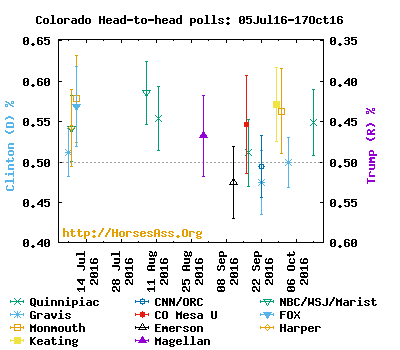 We have nine current polls in Florida, and eight of the polls have Clinton up. The one new poll has her up +4%. Overall, Clinton’s chances go from 91.8% to 94.2% in Florida.

We see a slight shift in Georgia, where Trump’s chances have dropped from 98.7% to 93.2%. This is entirely an artifact of 6 old polls dropping out and a new one coming in. The new poll has Trump up by +5.5%.

Minnesota has shifted in Trump’s favor, on account of a new Gravis poll that has the state tied. The other two current polls have Clintion up by +6.9% and 6%. The Gravis poll looks like an outlier. 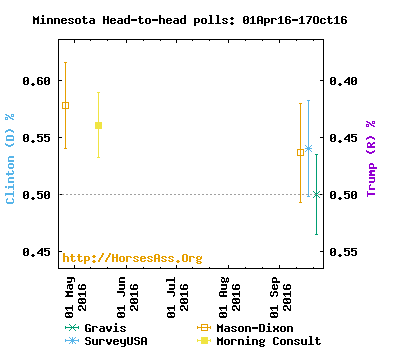 Two new Nevada polls join five other polls. Clinton has small leads in five of the seven polls, and the other two are ties. Clinton’s chances rise from 76.6% to 82.9% in the state. 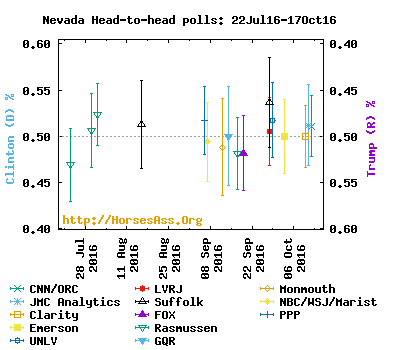 In North Carolina, one poll ages out and three new polls weigh in. Clinton leads in all nine current polls, typically with small leads. Her chances have gone up from a 86% to a 92.3% probability. 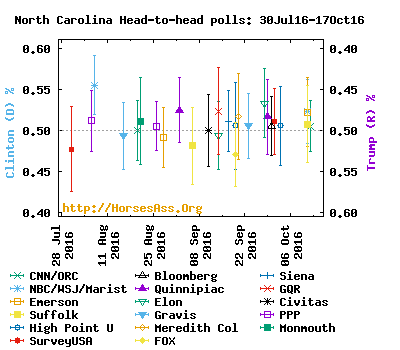 Utah has had some interesting polling, including a tie last week. Today, a Rasmussen poll with Trump up +2% joined a third poll with Trump at +6% to raise his chances of winning from 76.9% to 81.4%.

The long term trends in this race can be seen from a series of elections simulated every seven days using polls from 17 Oct 2015 to 17 Oct 2016, and including polls from the preceding 21 days (FAQ). 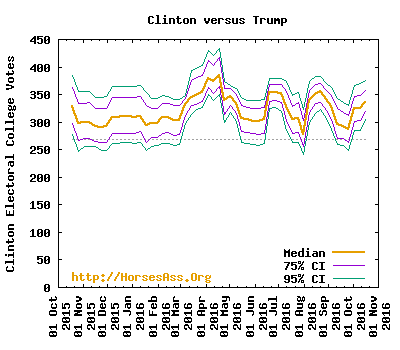 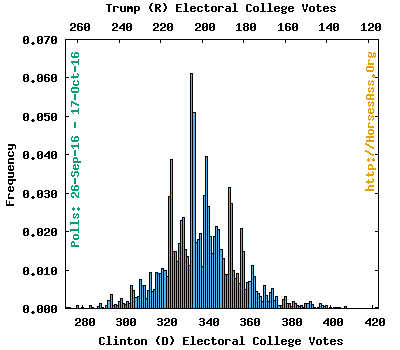