Just in time for Super Tuesday, here is an analysis of the current and most recent state head-to-head polls in the race between Barack Obama and Mitt Romney. The previous analysis showed President Barack Obama leading Rick Santorum with a mean of 356 electoral votes to Santorum’s 182.

There have been 22 new polls since then. I’ve included them in a Monte Carlo analysis of 100,000 simulated election. Obama wins all 100,000. An election held now would be won by Obama with near certainty.

Obama receives (on average) 338 to Santorum’s 200 electoral votes. That’s right…Rick Santorum is doing better against Obama than he did a couple of weeks ago. He still loses, but not a badly. 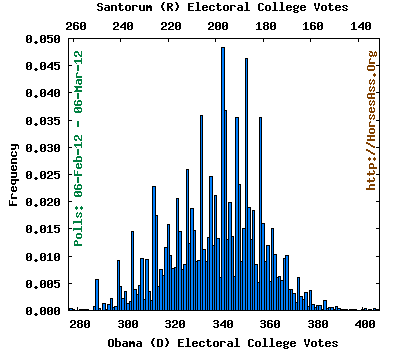