There were lots of new polls released in the two days since my previous analysis:

The good news for Romney is that Arizona gives him a modest +7% lead over Obama. And Romney will need it, now that Secretary of State Ken Bennett (R-AZ) has concluded that Obama really was born in Hawaii. Although there is an occasional poll showing Obama ahead, the larger trend shows the state in Romney’s column: 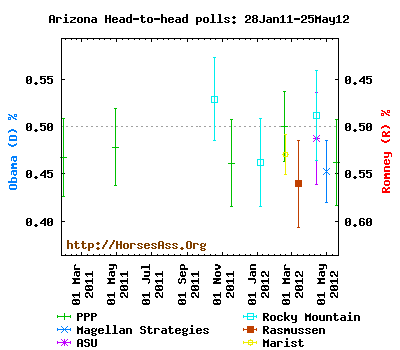 Other good news for Romney is that North Carolina has him up by +2% over Obama, and he takes three of the four May polls. The larger trend has favored Obama since late 2010, but things are clearly changing in the state: 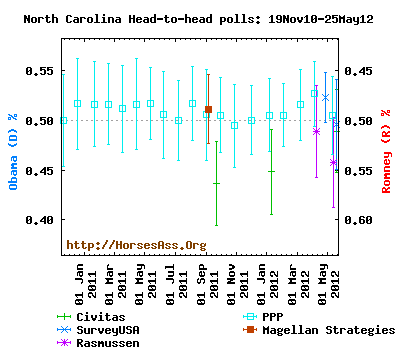 Florida is up to its old tricks of bouncing between candidates. After being down -6% in the previous poll, Obama scores +5% over Romeny. The overall trend in FL looks more favorable to Obama, but that can clearly change: 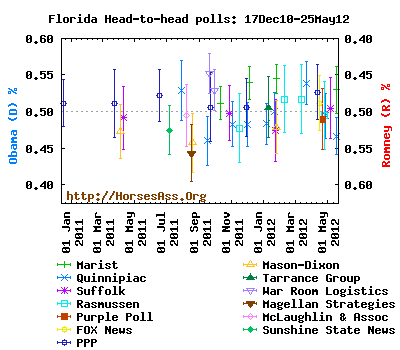 In good news for Obama, we finally get the first poll out of Maryland. Obama has a dominating +23% lead over Romney.

Obama takes another Ohio poll with a +5% lead over Romney. Obama has now led in the last ten Ohio polls, dating back to late February.

Virginia gives Obama +4% over Romney. The recent trend still favors Obama in the state, but there is at least a hint that the state is swinging toward Romney: 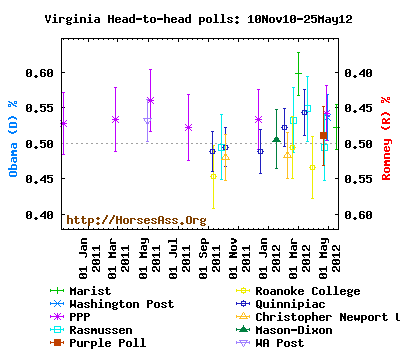 Both Wisconsin polls give Obama the lead over Romney, and solidify his lead in the state.

The probability is a slight improvement for Romney, up from a 0.2%. On the other hand, Romney’s expected electoral vote total drops from 220 to 215, as Obama’s increases from 318 to 323. 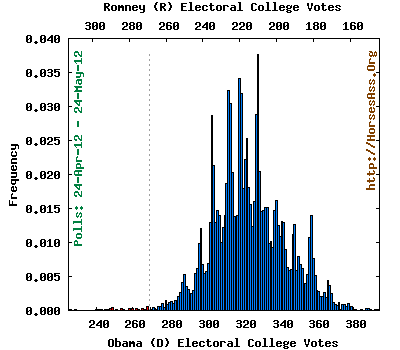