So, for comparison, using a 14 day window three days ago we had Obama leading Romney 316 to 222 electoral votes, and a 99.2% probability of winning an election held then.

Over the past three days, we have 32 new polls that cover 20 states plus each of Maine’s two congressional districts. Most of the polls are post-first-debate. Here are the details:

The candidates split the Colorado polls, with +1% for Obama and a +4 for Romney. The current polls split three to three between the candidates, giving Romney a very slight edge—a 53% probability of taking the state if the election was now. This is a pretty significant shift as can be seen from the polling history over the past three months: 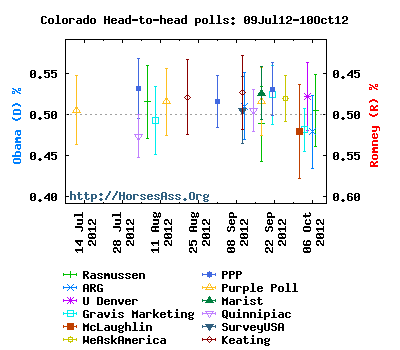 One new Florida poll has Romney up by +4%. Obama takes four of the six current polls and ends up with a slight edge of a 55% probability of winning now.

Obama gets another small Iowa lead, this time by +2%. He is down to an 85% probability of winning an election now. A week ago, that was a 99% probability….

Obama also holds a small +3% lead in the two new Michigan polls. That is a big drop from the double digit lead he has in the oldest current poll. Still, the evidence suggests Obama would take Michigan in an election now.

Minnesota gives Obama a double digit lead (+10%) in the only post-debate poll for the state.

Romney maintains his strong lead in Montana with this new poll.

Two very close Nevada polls taken together give Obama a very slight lead. Three of the four current polls were taken after the debate and show a very small Obama advantage. The oldest current poll gives Obama a +10%. Here is another view: 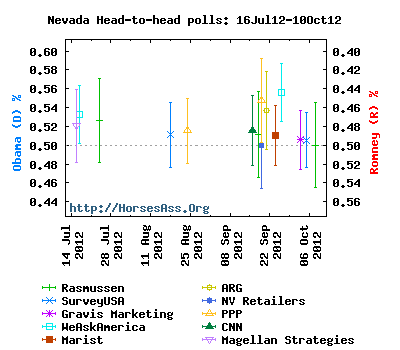 Today’s New Hampshire poll has Obama and Romney tied up. This new poll is the only post-debate poll of the three current polls.

New Mexico gives Obama a solid +11% lead over Romney. Essentially, this is as good as Obama was doing before the Debate.

In North Carolina, Romney leads Obama by a single-digit +8.7%. Romney takes three of the five current polls, including both post-debate polls. Romney has a 95% chance in the state for an election now.

Four new polls in Ohio split between Obama and Romney. Combined with four other current polls, Obama ends up with an 86% probability in an election now. Here’s the picture: 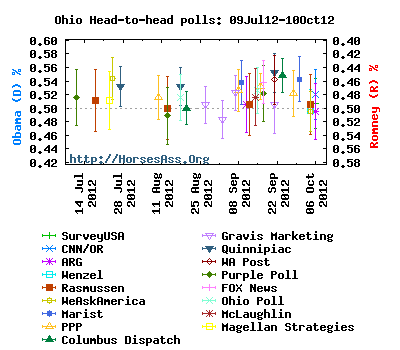 Obama keeps the lead in the three new Pennsylvania polls, albeit by smaller margins than he had pre-debate: 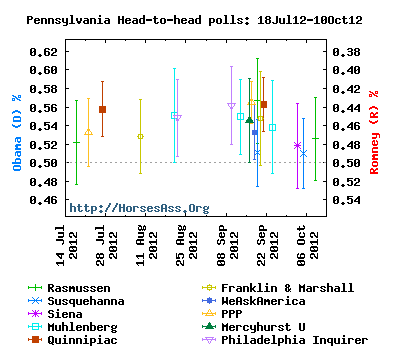 Obama leads in the latest Virginia poll. Combined with three other current polls we have a dead even race in the state. The polling history tells the post-debate story: 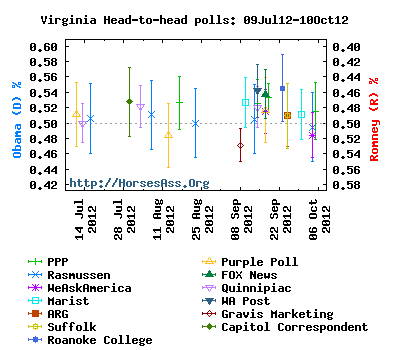 Obama maintains a weak +2% lead in Wisconsin, where his chances in the state have dropped to 97% for an election now.

The long term trends in this race can be seen from a series of elections simulated every seven days using polls from 10 Oct 2011 to 10 Oct 2012, and including polls from the preceding 14 days (FAQ). 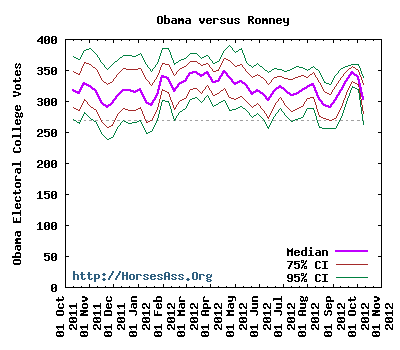 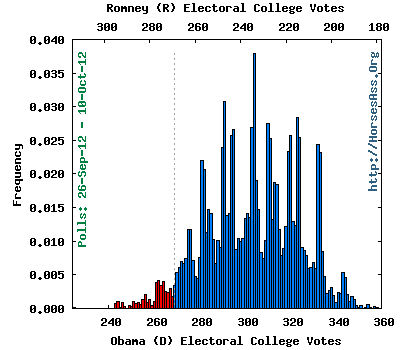