Ten days ago, Mitt Romney was on a roll. He had increased his probability of beating President Obama in a hypothetical election held then from 0.4% to 0.8%, and he gained in expected electoral votes up to 225. That was last week. This week, Romney slips.

There have been 18 new polls released to weigh in on the race:

New England states—Romney’s home turf—don’t seem particularly sold on the G.O.P. nominee. If he had dreams of taking Maine, this poll dashes them. Obama leads by +14%. In fact, Obama has had a good lead in every poll since last October. New Hampshire has Obama up by +5% over Romney. Obama has now led in three consecutive polls in the state going back to April.

Nebraska is exactly what we would expect, but there are a few other interesting polls out of the Midwest. Iowa gives Obama a slim lead over Romney by +1%, but polls have been bouncing between Obama and Romney.

In Wisconsin, Obama leads by +6% and trails by -3% in the two new polls. Overall, it sure looks like Obama has been slipping as the election season progresses: 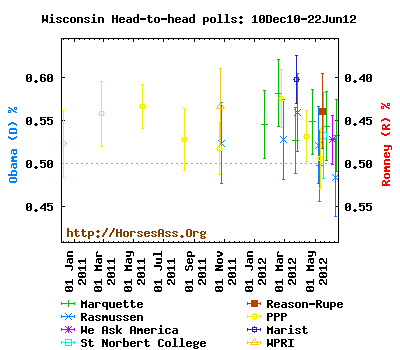 Four polls have been released for Michigan in the past 10 days. Obama gets a +1% and +8% in two, and Romney gets a +1.4% and +2% in two. The weight of the six polls taken over the past month give the advantage to Obama, who would be expected to win the state with a 90% probability right now. What is clear, is that Obama’s big lead early in the year has shrunk: 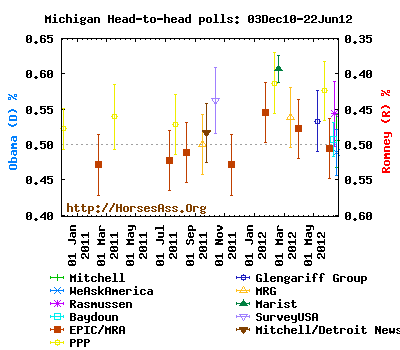 The mountain states show mixed results. Montana is still solid for Romney. Arizona gives Romney a frail +3% lead over Obama, and the collection of recent polls gives Romney the slightest edge in the state. The total polling history also suggests Romney has held a small lead for a long time: 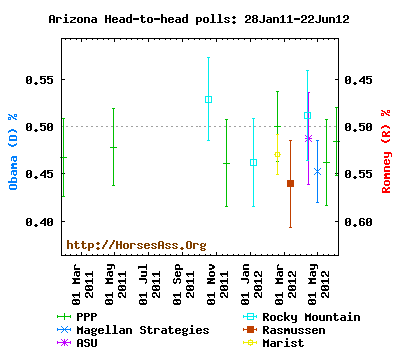 Obama dominates in Colorado with +7%. But the other recent polling suggests a tight race in the state (even though Romney has yet to lead in a single poll): 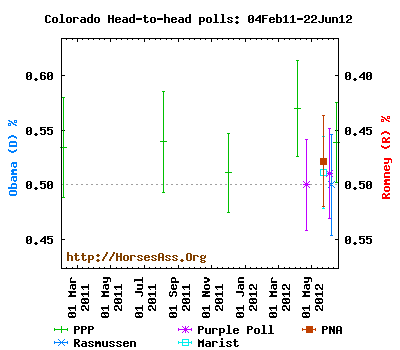 The Nevada poll has Obama up by +6% over Romney. So far, Romney has only led in one poll, and that was back in April…of 2011: 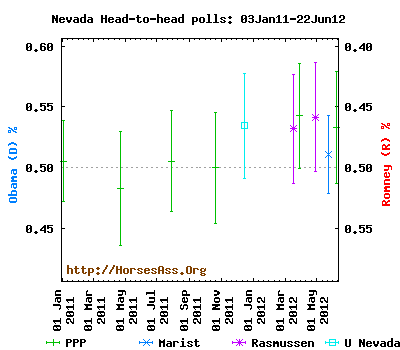 Recent Florida polls have bounced from Romeny to Obama. This time Obama takes a +4% lead. Looking at the recent polling results, Florida is truly a toss-up: 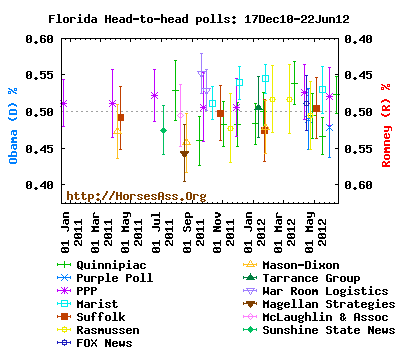 No surprises out of New Jersey, where Obama holds double-digit lead.

Obama leads in both new Washington polls, with one single and one double digit lead. 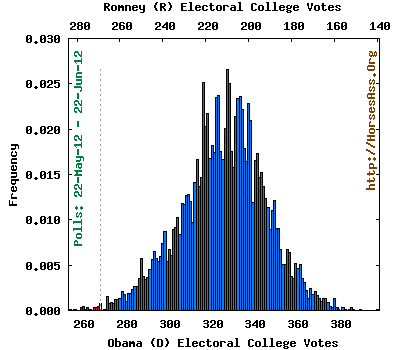