The previous analysis showed President Barack Obama leading Governor Mitt Romney by an average of 341 to 197 electoral votes. The results were strong enough and certain enough that we would expect Obama to be the certain winner in an election held now.

Over the past two days, 14 new polls have been released, covering 12 states.

The net result is that, after 100,000 simulated elections, Obama wins 100,000 times and Romney wins 0 times. Obama receives (on average) 345 to Romney’s 193 electoral votes. That is a gain of +4 EVs based on the new polls and the “aging out” of some older polls. We’d have to say the the evidence is quite strong that Obama would achieve victory in a hypothetical election held today.

Here are the new polls, followed by a discussion of some of the changes over the past couple of days:

There are a couple of bright spots for Romney, including a poll from Arizona that has Romney up by a +10%. Romney’s lead in the previous AZ poll was only +3%. The three current polls, taken together bump Romney’s chances of taking the state from 97.5% to 99.3% in an election now.

In Colorado, Obama has a +4.7% lead in the latest poll. Obama gets a slight bump from 95% to 96% probability of taking the state (for now) from the poll.

Two more Florida polls go to Obama. He gets a +3% in one and a +9% in the other. Taken together the 15 current polls suggest a 99% chance of Obama taking the state—up from a 93% probability without these two new polls.

Indiana has Romney up by a respectable +12% over Obama. Indiana barely went for Obama in 2008. It seems unlikely the state will repeat that in 2012.

Another Iowa poll goes Obama’s way, this time by +7%. Romney has only led in one of the four current polls taken over the past three weeks. Taken together, Obama gets a slight bump from 95% to 98% of taking the state now.

The other bright spot for Romney is Missouri, where Romney leads in a new poll by +5.9%. Together, the two current polls bump Romney’s chances from 68% to 90% of taking the state now.

Another Ohio poll goes to Obama, this one by double digits. This gives us 12 polls in Ohio over the past three weeks and every one of them goes to Obama. As a result, Obama won all 100,000 simulated elections in that state.

Two new Pennsylvania polls both go to Obama. One by +12% and the other by +9%. The eight current polls all go to Obama. The give Obama, in aggregate, a +9% lead over Romney, and suggest Obama would take the state with certainty in an election right now.

A new poll for Washington state has Obama leading Romney by +17.8%. The five current polls all give Obama double digit leads in the state. 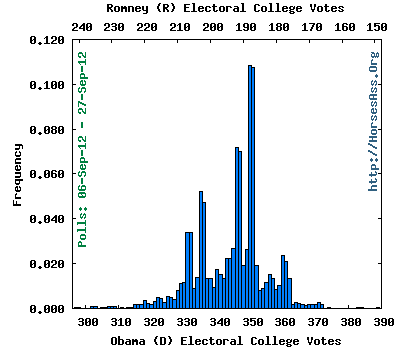