Another day, 26 new polls, and we are still at the same place. President Barack Obama is still leading Governor Mitt Romney by 309 to 229 electoral votes (on average).

Colorado gives three new poll leads to Obama. Obama takes 6 of 7 current polls and has a probability of winning the state of 94%.

We get four new Florida polls. One goes to Romney, two to Obama and the last is a tie. Romney has the edge among the 9 current polls, as he is up +0.8%. That translates into a 69% probability of Romney winning the state. Here is the past couple of months of polling: 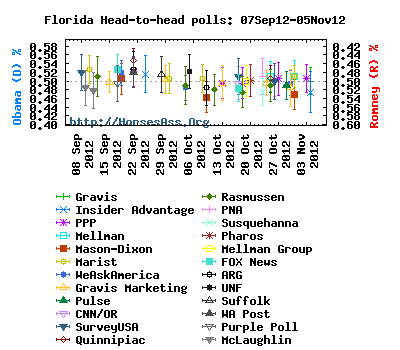 Another Iowa puts Romney over Obama, by a slim +1%. Even so, Obama takes six of the eight polls collected over the past week, and it earns him a 90% probability of winning the state now.

In Michigan, Obama polls at +5%. The verdict of the 5 current polls is that Obama will take the state with a 95% probability.

Nevada gives Obama a +4% poll. Combined with the other current poll Obama takes the state 90% of the simulated elections.

A flurry of four New Hampshire polls today mostly gives Obama small leads. There is one tie, however. This brings us to 8 polls taken in the past week for the granite state. Two of them are ties, but Obama leads in the rest by small margins. The analysis gives Obama a 91% probability of winning the state.

Two North Carolina polls go +4% Romney and tie. The third current poll is also a tie. Together Romney has a narrow advantage, and a 72% chance of winning the state.

Four new Ohio polls today. One is a tie, and three give Obama tiny leads. But we now have 12 (count em!) polls collected in the past week. Two are ties, but Obama leads in the remaining 10. The provide evidence that Obama will take the state with a 98% probability.

The only Pennsylvania poll supports Obama over Romney by +3%. We only have 5 current polls and, aside from one tie, Obama leads ’em. He gets a 91% probability out of it.

Three new Virginia polls split 2:1 in favor of Obama. Now with six current polls, Obama takes all but one from today. He holds a +1.4% edge and seems to have a 78% chance of taking the state. This is worth a picture: 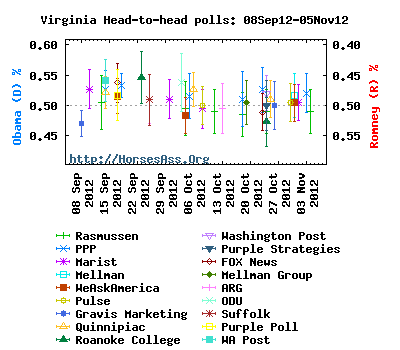 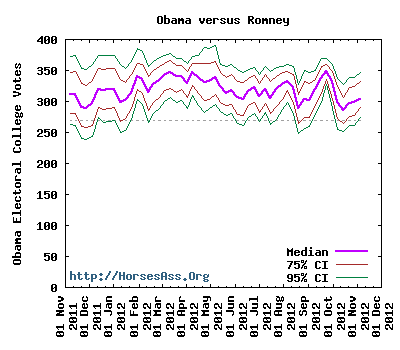 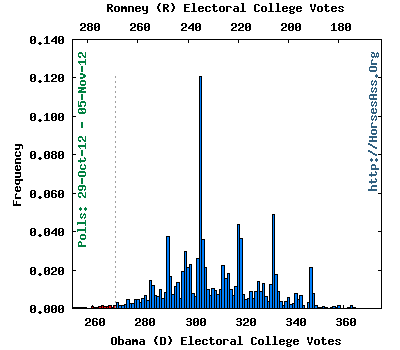