It’s been a long time since I done these analyses—just over a month. I quit doing them after Mitt Romney became the presumptive nominee. I pointed out that:

Since Pres. Obama was beating Romney in 100% of the simulated elections, with an average electoral vote total of 347 to 191, it seemed silly to keep doing these analyses until the race looked a bit more “post-primary.”

Since that last analysis, 50 new polls have come out, covering 26 different states. (Still no new S.C. poll…sorry.) I guess it’s time to see how Obama and Romney stack up.

That is why I do these analyses. I collect only the state head-to-head polls and use them to infer the winner of the Electoral College. So, with an (apparently) close popular vote, how does the election look? 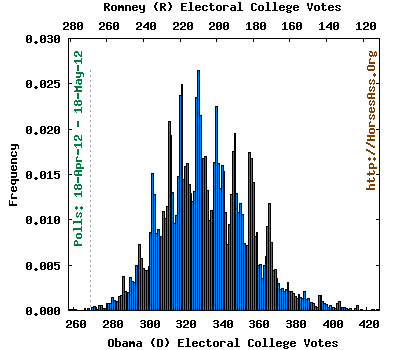