There have been 17 new polls released since my last analysis of the state head-to-head polls with President Barack Obama against Rick Santorum:

The most interesting result is that Obama leads in both Pennsylvania polls—that is, in Santorum’s home state. Obama also has a small lead in Florida.

The previous analysis showed President Barack Obama leading Santorum by a mean of 338 to 200 electoral votes, and a 100% probability of winning an election held then.

Today’s Monte Carlo analysis employing 100,000 simulated elections, gives Obama 99,695 wins to Santorum 305 wins (including the 45 ties). Obama receives (on average) 329 to Santorum’s 209 electoral votes. In an election held now, Obama would be expected to win with a 99.7% probability, Santorum would win with a 0.3% probability of winning.

Remarkably, Santorum is doing better against Obama than Mitt Romney was two days ago, where Obama had a 100% probability of winning with a mean of 339 to Romney’s 199 electoral votes. 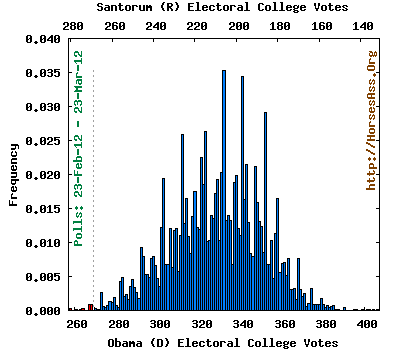