[Update: An analysis using some newer polls can be found here.]

Since the previous analysis in this race, five new state head-to-head polls representing four states have been released.

Two new polls come from Florida, where the media markets are currently flooded with Republican primary ads. The newest poll from Mason-Dixon gives Romney a small +4% lead over Obama. The slightly older Quinnipiac poll has the race all tied up at 45% a piece.

In the previous analysis, Obama would have won with a 71.9% probability, and his average electoral vote total was 284 to Romney’s 254.

Now, a Monte Carlo analysis using 100,000 simulated elections gives Obama an expected electoral vote total of 306 to Romney’s 232 for an election held now. Obama is at a 95.1% probability of winning that hypothetical election to Romney’s 4.9%. By traditional statistical inference, we would say Obama’s lead is “significant”—that is, it’s unlikely to be due to sampling error. 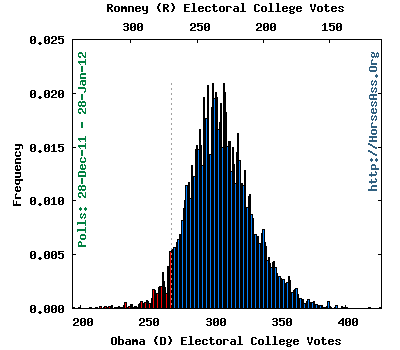