Several weeks A week and a half ago, former Sen. Rick Santorum surpassed former Gov. Mitt Romney in the national polling to become the presumptive front-runner in the G.O.P. primary contest. In fact, Santorum has led Romney in the past six consecutive polls since February 9th. Santorum has led by double digits in the last two (here and here).

So why am I just now getting around to the first analysis of state head-to-head polls for a match-up with President Barack Obama? In fact, I’ve been ready to go for weeks now. The problem is that there is a scarcity of polling data for Mr. Santorum. It seems pollsters have, until very recently, considered Santorum one of the least likely nominees in what was once a crowded G.O.P. field.

To quantify it, I have one or more polls in 37 states (plus each of Nebraska’s three congressional districts) for Newt Gingrich. But, after throughly scouring the the intertubes for polls, I only find polling for 18 states that match up Obama and Santorum (and no polls for Nebraska’s CDs). I’ve been waiting a couple of weeks for more polling, and the wait has not gone unrewarded. In the past 9 days, 13 of 19 polls have included an Obama–Santorum match-up, some of those polls are state firsts.

What do we do with states for which there is no polling? As described in the FAQ, I average the 2004 and 2008 elections according to Democratic and Republican percentages. The winner wins the state in each of the simulations. What this rule means statistically is that the results are underdispersed—that is, the distribution of electoral votes is narrower (and lumpier) than it would be if we had polling data for the “missing” states. The problem will correct itself as more polling data come in.

Here’s the result for today. A Monte Carlo analysis using the state head-to-head polls gives Obama a victory in each of the 100,000 simulated elections. Obama receives (on average) 349 to Santorum’s 189 electoral votes.

Earlier today, I did similar analyses for Gingrich and Romney:

This summary shows that Santorum performs much better against Obama than Newt Gingrich, but a little worse than Mitt Romney.

Here is the distribution of electoral votes [FAQ] from the simulations. That’s a pretty lumpy distribution, largely reflecting uncertainty in Iowa, Missouri, North Carolina, and Pennsylvania: 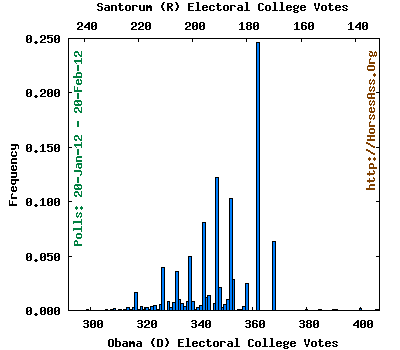