It’s been a couple of weeks since I’ve posted one of these analyses. Pollsters have been rather focused on the G.O.P. primary and not so much on the general election, so there have only been twelve new state head-to-head polls to incorporate into a new analysis.

The three new polls from two traditional swing states all favor Obama, with +3% in Florida and +6% & +7% in Pennsylvania.

The good news for Obama comes from three states that went for Bush in 2004 and Obama in 2008: New Mexico where Obama has a remarkable +19% lead, Virginia where Obama is up by +8%, and North Carolina where Obama has ekes out a +3%.

The good news for Romney is Missouri, which McCain barely won in 2008, and that has now swung to the right: Romney leads Obama by a solid +9%.

The previous Monte Carlo analysis showed President Barack Obama leading Mitt Romney by an average of 341 to 197 electoral votes, and 100% probability of winning an election held then.

Now, after 100,000 simulated elections, Obama wins every time, so he is still expected to win an election held now with 100% probability. Obama receives an average of 339 to Romney’s 199 electoral votes. 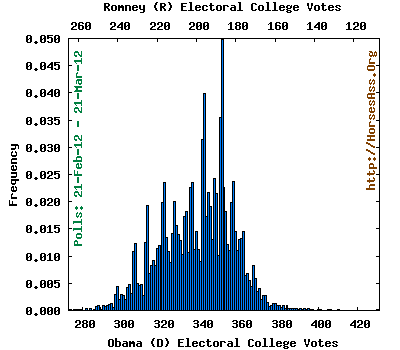