It’s been awhile since I’ve posted one of these. That analysis showed President Barack Obama leading Mitt Romney by 331 to 207 electoral votes and with a 99.9% probability of winning.

Some 23 new polls have trickled out since then. I’ll skip the details (you can get to the polling data from the big table below). With these new polls weighing in, a Monte Carlo analysis gives Obama 100,000 wins out of 100,000 simulated elections. This implies that, in an election held now, Obama would have a near-100% chance of winning. Obama has gained +10 electoral votes for an average of 341 to Romney’s 197.

Obama likely wins the “big three,” Ohio, Pennsylvania and Florida, as well as Michigan, Minnesota, Wisconsin and Virginia. Still no new polls in South Carolina, so the state is still blue based on the early December poll. 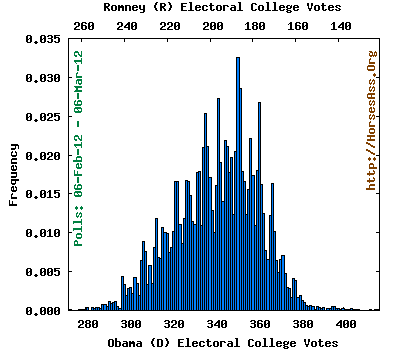