[Note: This analysis was completed this morning, but publication was delayed for the two previous posts. New polls are probably out by now…they will be included in my next analysis.]

The previous analysis showed President Barack Obama leading Governor Mitt Romney by 292 to 246 electoral votes. The Monte Carlo analysis give Obama a 93.4% and Romney a 6.6% probability of winning an election held now.

There was a boatload of new polls released in the past couple of days. But before discussing them, I should point out, that I am now using a ten-day “current poll” window. This means the analysis works with polls taken within the past ten days whenever possible. Next Tuesday, if enough polls are being released, I’ll shrink the window down to one week. After some poll talk, I’ll discuss the effect on the results of shrinking the window.

Two new Florida polls both have the candidates tied. Still, Romney takes four of the seven current polls, giving Romney a thin +1.4% lead in “votes” and a 77% probability of winning an election held now.

Indiana polls are notable because they are relatively rare. This new poll confirms that Romney has a good lock on the state.

Michigan turns in a squeaker…essentially a tie, with Obama up by +0.3%. With one other current poll giving Obama a +6%, Obama holds a 79% probability of winning the state.

The new poll in Minnesota is the only current poll for the state. With Obama up by a thin +5%, his probability of winning the state is 79%.

We get a new Nebraska poll showing Romney up by +11.5%. Unfortunately, we don’t get the breakout of the Nebraska congressional districts. Mid-September was the last time we had a poll for NE-2, and that showed a 44%–44% split. Obama won NE-2 in 2008 by +1.2%, so in the event of close race, NE-2 could end up being kingmaker.

Three new Nevada polls all go to Obama by quite small margins (+4%, +2% and +2%). In total, we have six current polls and they all favor Obama, giving him a 96% probability of winning now. The last three months of polling in the state tell a story of a small, but stable, lead: 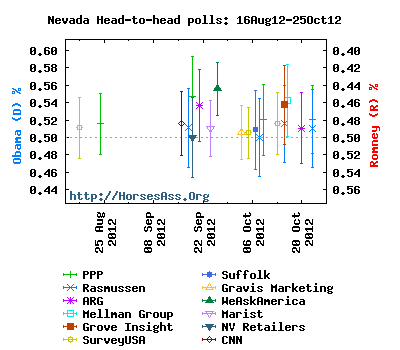 Three new New Hampshire polls go 2:1 for Romney. In fact, the candidates split the six current polls. Obama comes out +1.4% ahead in the “votes”, largely on the strength of one University of New Hampshire poll.

Three North Dakota polls in one week? Go figure! But, no doubts, either. Romney is double-digit solid there.

Five new polls come in for Ohio. Romney takes exactly zero of them, although the Rasmussen poll is a tie, and Obama’s leads are pretty small. The current polls support a small lead for Obama, and jointly give him a 96% probability of winning right now. The past month of polling in this race shows a race that has been stable with, on average, a small advantage for Obama: 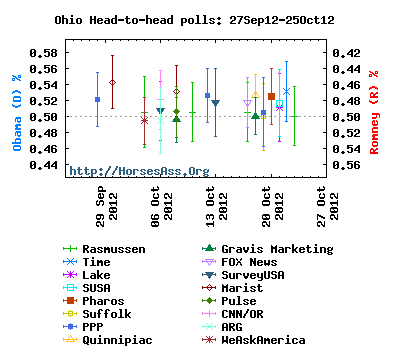 Pennsylvania supports Obama over Romney by +4.0%. The three current polls give Obama a +4% advantage that translates into a 90% probability of winning the state now.

Two new Virginia polls give Obama a +5% and +1% edge over Romney. With three of four current polls in Obama’s column, Virginia turns blue. Obama’s lead is tenuous, however, and he has only a 67% probability of winning the state now.

In the new Washington poll, Obama gets a solid double-digit lead.

Obama gets a narrow lead in the new Wisconsin poll. With all three current polls giving him a small lead, Obama gets a 90% probability of winning an election now in the state.

The large batch of new polls, combined with the ten-day “current poll” window, has increased Obama’s expectation for electoral votes by +7, but slightly reduced the probability of winning. The reduced probability reflects the fact that the smaller window results in a smaller number of polls and, therefore, polled individuals. And a smaller sample of “voters” increases uncertainty in the outcome. Essentially the ten-day window throws out older evidence. That way, if the race is undergoing shorter changes in the weeks before the election, the analysis will more likely pick them up.

The time series graph (from elections simulated every 7 days using polls from 25 Oct 2011 to 25 Oct 2012 [FAQ]), it looks like Romney’s post-first-debate gains peaked a week or two ago. The race has, at least, stabilized, and Obama’s slight gain may be a sign of the trend reversing. It’s too early to claim that Obama has the momentum, however. 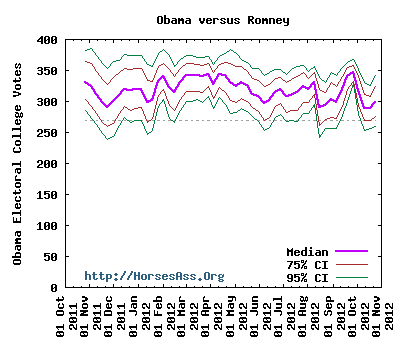 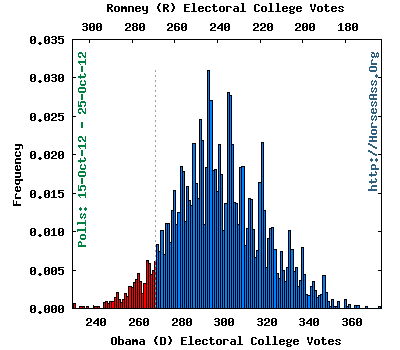