The Monte Carlo analysis two days ago showed President Barack Obama leading Gov. Mitt Romney by a mean of 303 to 235 electoral votes. If an election was held then, we would expect Obama to win with a 95.7% probability, and Romney with a 4.3% probability. Since Obama’s probability is greater than 95%, standard statistical reasoning would call Obama’s lead “statistically significant.”

Today there were lots of new polls released.

Colorado turns red with the addition of two new polls that give Romney a +1% edge. Romney leads in five of seven current polls and has a 75% probability of taking the state now.

Three new Florida polls, also give Romney the edge. He leads Obama in five of the ten current polls, but by larger margins. Taken together, the simulation gives Romney a 76% chance of winning Florida now. Here’s the last three months: 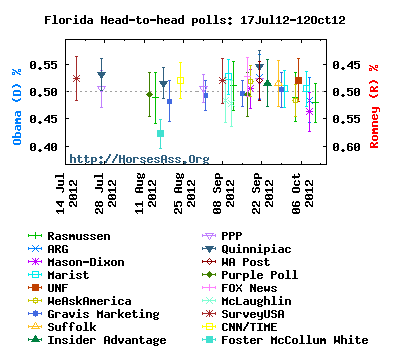 Michigan voters seem content to supports Obama, if these three polls are representative. All five current polls go to Obama and they average out to a mid-single digit lead. The larger picture shows Obama with a pretty solid advantage: 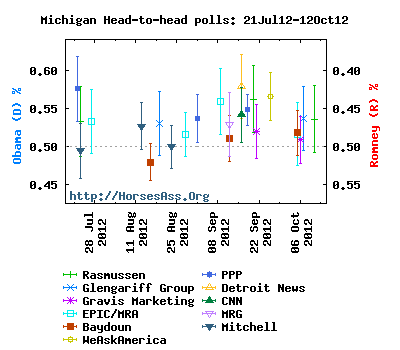 Two new Nevada polls give Obama weak leads. In fact, Romney doesn’t lead in any of the five current polls, although one poll had the candidates tied. Taken together, Obama get a 74% probability of taking the state now.

A new New Hampshire poll goes surprisingly strongly for Romney—by +4%. The previous poll was a tie, and the oldest current poll has Obama up by a comfortable +15%. But fair warning: That poll was taken before the presidential debate! New Hampshire is definitely worth watching at this point. Here is the rather abrupt change in a picture: 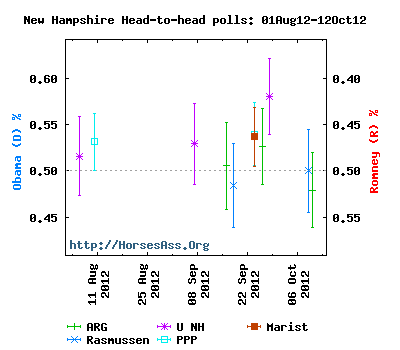 Only one new North Carolina poll that puts Romney over Obama by +3%. Romney leads in three of the six current polls and all three post-presidential debate polls.

Four new Ohio polls split 3 to 1 for Obama. The President leads in 8 of 12 current polls. If the election was held now, the model predicts Obama would win Ohio with a 91% probability.

Pennsylvania is even stronger for Obama, who takes both of the new polls. Obama leads in all five of the current polls, and would be expected to win Pennsylvania now with a 94% probability.

Three Virginia polls give three results: a tie and a win for each candidate. When the current polls. are combined, Obama takes 50.4% of the pooled “votes”. And that translates into a 69% probability of winning an election right now. Here is the story in picture form: 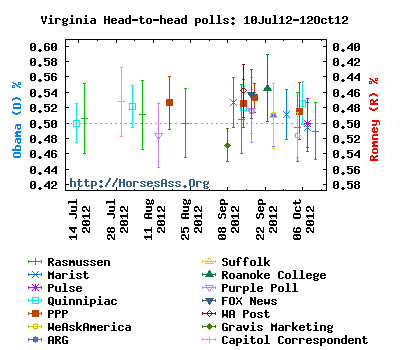 Two new Wisconsin polls give Obama weak leads (+2% and +4%) over Romney. Obama’s lead has been cut from double digits just before the debate to about a +4% advantage. But the results give Obama a 98.4% probability of winning the state right now. The picture shows Obama with consistent lead in the state, if by a reduced margin: 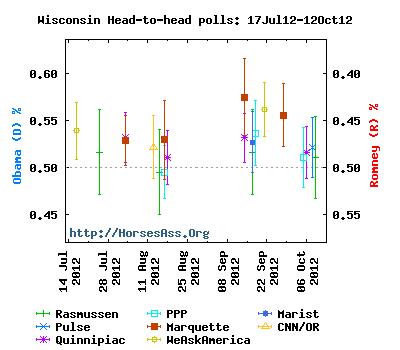 The long term trends in this race can be seen from a series of elections simulated every seven days using polls from 12 Oct 2011 to 12 Oct 2012, and including polls from the preceding 14 days (FAQ).

Essentially, Mitt Romney rebounded back to where he was just after the Republican convention. 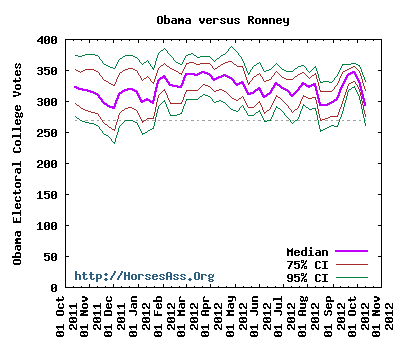 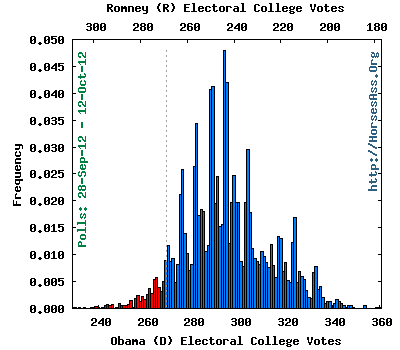