My previous analysis showed President Barack Obama leading Romney by 327 to 211 electoral votes, and with a 99.9% probability of winning an election held then.

Since then, eleven new polls covering nine states have been released:

I probably shouldn’t be surprised any longer on how solid New Mexico is for Obama at +11%. The polling history backs the new poll up: 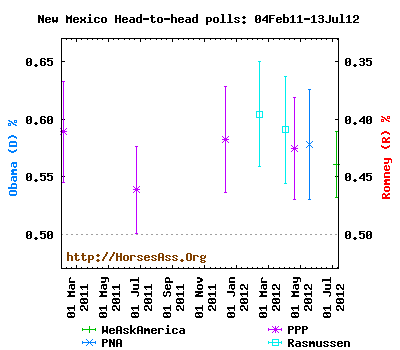 Weeks after the unsuccessful recall of their Republican Governor, Wisconsin seems to be holding for Obama. Both new polls have Obama’s lead just outside the margin of error: 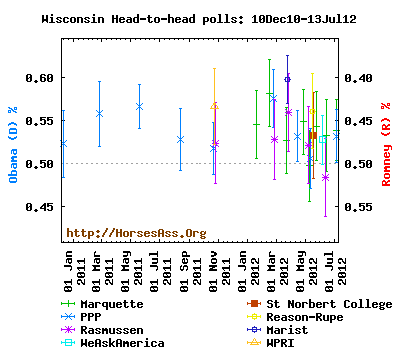 Romney goes up by +1 in this week’s Florida poll, but Obama still takes three of the four current polls for the state. Obama would be expected to win Florida right now with a 91% probability.

Obama and Romney split North Carolina this week at one poll apiece. In the past month of NC polls, Romney takes three and Obama takes two. The simulation analysis suggests that Romney would win the state (now) with a 59.5% probability.

Virginia gives Obama a +8% lead over Romney. But Romney lead by a smaller margin in a much bigger current poll. The two polls, taken together, have the race in a dead tie (Obama won 50,112 times, Romney, 49,888 times). It is difficult discern a solid trend. One could argue Obama maintains an advantage, and one can argue that Romney has turned the state around: 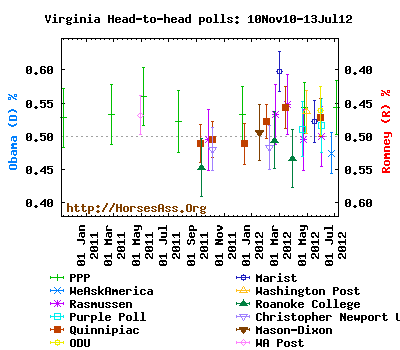 So, what would happen if the presidential election was held today? 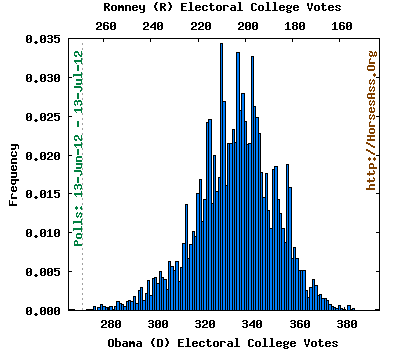