It has been over two weeks since the previous analysis of the Obama–Gingrich match-up using state head-to-head polls. This is largely because Newt Gingrich’s second lead over Mitt Romney in the national G.O.P. primary polls was rather transient—even more fleeting than his late-2011 lead.

As the life is sucked out of the Gingrich campaign, these analyses become less relevant. A telltale sign of a dying campaign is when pollsters no longer include a candidate in its state head-to-head polls. That has begun to happen for Gingrich. Rasmussen polled Romeny and Santorum, but not Gingrich, in its most recent Florida, New Mexico, and California polls. A Civitas poll in North Carolina and a WBUR poll in Massachusetts did the same. A recent Elway poll in Washington only reported results for Romney.

So, for President’s day, here is an analysis for Gingrich. This may be Newt’s last. I’ll also post an update for Romney, and post Santorum’s very first analysis.

The previous analysis showed President Barack Obama with 100% probability of beating Gingrich, and leading by (on average) 421 to 117 electoral votes.

That newt gains in average electoral votes while losing steam in the primary is because polling is so infrequent at this point. We are now seeing the “fruits” of Gingrich’s surge two months ago. 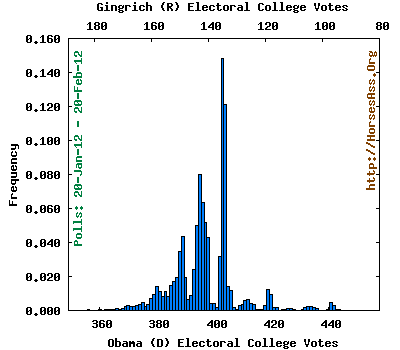