The previous analysis showed President Barack Obama leading Mitt Romney by a mean of 325 to 213 electoral votes. In an election held then, we would have expected Obama to win with a 99.8% and Romney with a 0.2% probability.

In the last two days there have been a plethora of polls released—16 covering 13 states. Here’s what I’ve found:

The unsurprising Obama polls are from Vermont, Massachusetts, and Connecticut. Likewise, Romney makes a strong showing in Montana and Missouri.

Romney makes a surprisingly weak +3% showing in Georgia, where he has been typically been doing high single digit or double digit leads.

There is a big surprise in Florida. A Quinnipiac poll gives Obama a +3% edge over Romney. That’s not the surprise. A second poll by Foster McCollum White has Romney up by an amazing (unbelievable?) +14%. This poll requires some discussion.

This poll has triggered a lot of chatter among poll collectors. Is it real? Is it honest? Is it an “outlier.” One of the thing I noticed is that the raw tallies in the poll add up to more than 100%—102.13%, to be exact!

I went to the source; I had a chat with the firm’s pollster Eric Foster. Eric was friendly and most helpful. The poll is not sponsored by anyone. Rather, they firm did the poll on their own, as a way to get their feet wet in Florida (so to speak). It is an independent poll. I asked about the percentages summing to greater than 100%, he suggested this is a result of their weighting. I proposed renormalizing the numbers to proportionately reduce them to 100%, and he agreed this was a good strategy.

We then had a discussion about their weighting method. They went to each county to get voter turn-out information by age group and race/ethnicity and used that to weigh the poll (some of the details were lost in our lousy cell phone to cell phone connection). He stands by the numbers.

In other words, a polling firm that is new to Florida used an elaborate and unorthodox turnout model to weight the poll, and ended up with some kind of error that resulted in percentages totaling greater than 100%. I cannot say that I am convinced that what they have done was done correctly. Even so, it meets my poll criteria and it could be correct. (They’ll look like geniuses if Florida goes double digits for Romney!) So I include it here, and recognize that Florida will be reddish for the next month. But Georgia is not quite red enough and we still need a new poll in South Carolina! That’s the way the polls roll.

Earlier this week two polls in Michigan split between the candidates. The new poll swings back in Obama’s favor (+5.5%).

Nevada has Obama up by a fragile +2%, but Obama has maintained the edge since the start of the year: 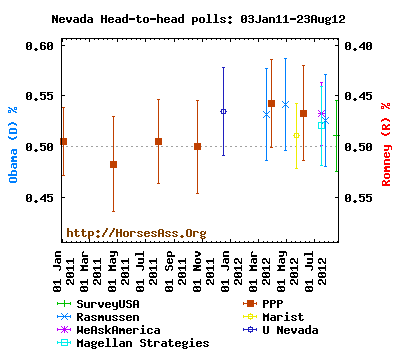 New Mexico loves Obama, giving him a +14% lead over Romney this poll.

Two new Ohio polls both go for Obama by +3% and +6%. Likewise, Pennsylvania seems to prefer Obama over Romney by +9%.

Finally, Ryan may have had a small effect on Wisconsin, where Obama scored a +2% in one poll and +5.5% in another. The race has certainly tightened but a lasting effect is not obvious based on these newest polls: 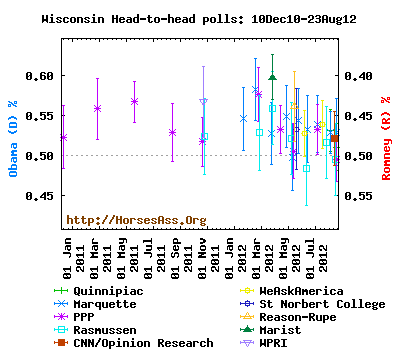