In the previous installation, President Barack Obama was leading Mitt Romney by 290 to 248 electoral votes on average, with a 77.5% probability of winning. Today there were four new polls released, and Obama slips a little bit:

Obama and Romney alternate wins in the four Florida polls taken since early December. In this one, Romney leads Obama by +4.7%.

In North Carolina, Romney currently leads Obama by +9% (48% to 39%), but Obama lead by +1 in the previous poll and they were tied in the poll before that. Romney is at a slight advantage, although I am a little suspicious of the Civitas polls—they come from a conservative think-tank. But their polling track record isn’t horrible. 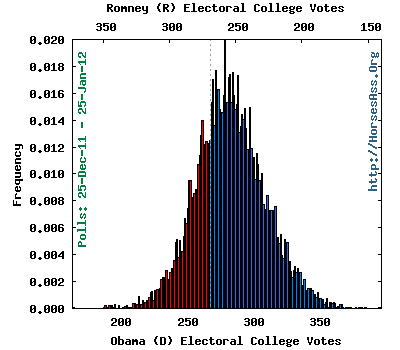