The previous analysis showed G.O.P. presidential candidate Mitt Romney edging up to almost a 1% probability of winning an election held now. Romney lagged in expected electoral votes to President Barack Obama by 230 to 308.

Since then, 15 new polls covering 12 states have been released.

Obama takes the latest Colorado poll by +4% over Romney, and he leads in four of the five current polls for the state.

The latest Florida poll has Obama leading Romney by +4%. The current Florida polls go 4 to 2 for Romney, and Romney is given a 97% chance of winning the state right now.

Obama is up by +2% in the new Iowa poll. The candidates split the two current polls, but the poll that has Obama up is the much larger of the two: 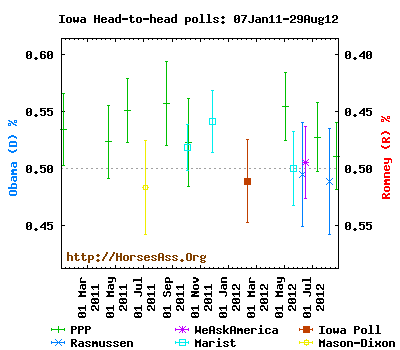 In Michigan, Romney leads Obama by a weak +0.1%. The candidates split the four current polls, but the weight of the evidence has Obama up slightly with a 57% probability of winning an election held now.

The candidates split the two Missouri polls, with Romney up by +7% in one and Obama up by +1% in another. Obama has only led in this one poll out of the 6 current Missouri polls: 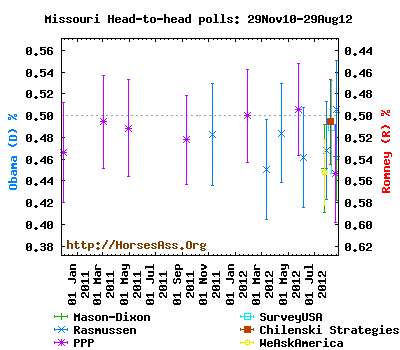 Nevada has Obama up by a slender +3% over Romney, slightly beating the +2% he had in the other current poll: 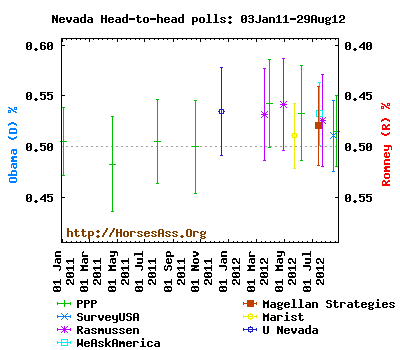 Little surprise that New Jersey has Obama up by a double-digit lead (+14%) over Romney.

In North Carolina, Romney has a +1% lead over Obama in one poll and the candidates are tied in another. The weight of evidence in the five current polls has Romney up by the slightest margin and a 56% probability of taking the state in an election held now: 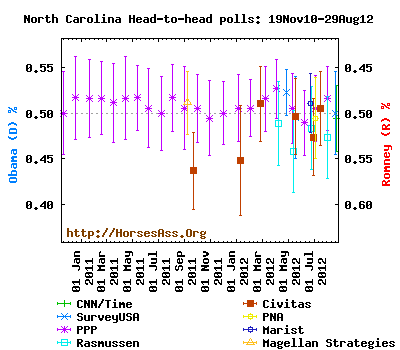 Ohio is a tie at 45% each in the new poll. But Obama has led in three of the current six polls (with two ties), so the weight of evidence gives him an 87% probability of taking the state right now: 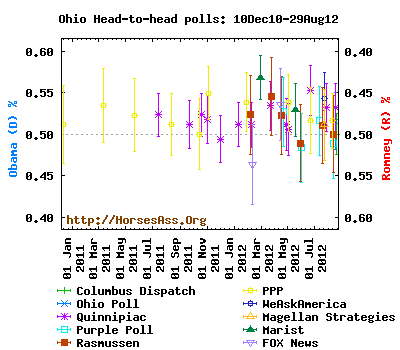 Another Pennsylvania poll gives Obama a +9% lead over Romney. Obama take all three of the current polls and would be expected to win an election now with a 99% probability.

Virginia is all tied up at 47% in the newest poll. Overall, Obama takes 4 of the six current polls, so he ends up with a 90% probability of winning an election held now. 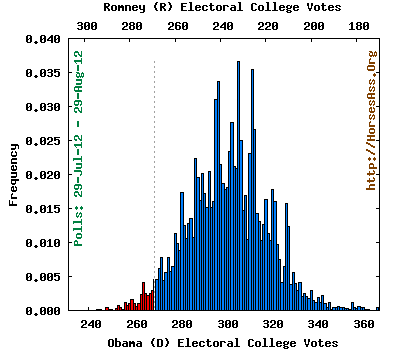