Previous analyses shows that former Gov. Jeb Bush (R-FL) and Sen. Marco Rubio (R-FL) are performing reasonably well (even if losing) against Hillary Clinton in a electoral college election that uses state polling. We might label Bush and Rubio as “top-tier” candidates, except that neither are leading in the G.O.P. primary. Still…they are a threat to Clinton.

Then there is the bottom tier. Certainly, Gov. Scott Walker (R-WI) falls into this category based on his abysmal performance against Clinton (0.5% probability of winning to Clinton’s 99.5%).

Senator Rand Paul (R-KY) must also be relegated to the bottom of the Republican primary heap, although in fairness, he is doing much better than Walker. Not really a threat, though. 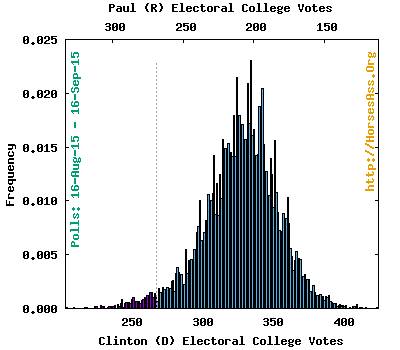 The long term trends in this race can be seen from a series of elections simulated every seven days using polls from 16-Sep-2014 to 16-Sep-2015 that including polls from the preceding one month (FAQ). 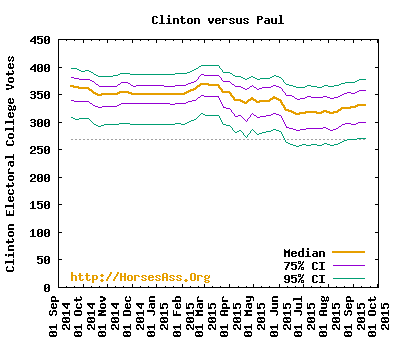