We’re at an interesting point in the presidential race. I’ve been running analyses a couple of times a day as new batches of polls are found and entered, and the race has bounced up and down with each batch of polls. (I had a pretty packed weekend, so didn’t have the opportunity to post any of these analyses since my previous analysis.)

For example, yesterday afternoon, Romney was down to about 3% probability of winning. By yesterday late evening, with a few more polls, Romney had surged to something around 17%.

Today’s batch of polls have been mixed, but slightly more favorable to Obama.

Romney leads in the new Colorado poll. The candidates split 3 and 3, the six current polls. Overall, the edge goes to Obama who earned +1% more “votes”, and would be expected to win now with a 71% probability. Here is the last three weeks of polls in a picture: 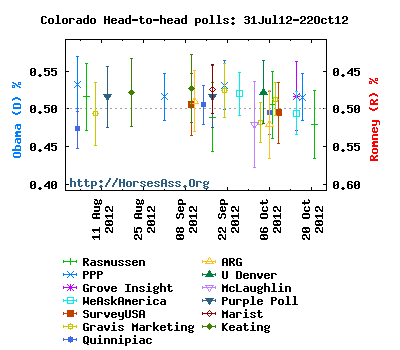 In D.C. Obama up by +80% over Romney. That’s not the probability of winning D.C.—that’s the point spread!

The five new Florida polls go 4:1 for Romney. He now leads in 9 of 11 current polls, usually by small, single-digit, margins.

Iowa must be close. We have one tie, a +1% for Romney and a +1% for Obama. Overall, with six current polls that show two ties, one lead for Romney, and three leads for Obama. Together, the polls support Obama winning with a 90% probability right now. Here is the picture: 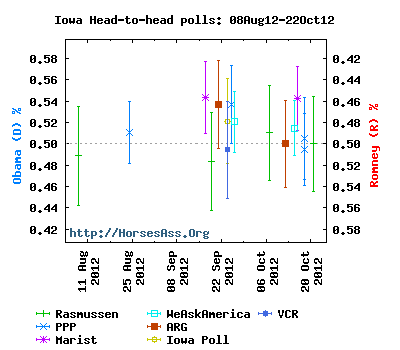 Obama takes the new Nevada poll. He now leads in five of six current polls, and the last one is a tie. Obama’s lead is expected to hold (now, anyway) with a 96% probability.

New Hampshire has been bouncing around for the past week. A new poll give Obama a +9% and another new poll gives Romney a +1%. Of the six current polls, Obama leads in two, Romney in three (but one is very close), and there is one tie. Overall, Obama takes +1% more of the “votes” and has about a 67% probability of winning.

We only get one new North Carolina poll, and it has Obama up by +3%. But Romney leads in four of the five current polls and, overall, has better prospects for winning the state—an 83% probability at this point.

Oh, Ohio, how you tease the Obama supporters and taunt the Romney supporters! There are five new polls and Romney leads in one of these by a +0.2% edge. The raw data are 280 “votes” for Romney and 279 “votes” for Obama. One other poll is a tie, and Obama takes the rest. But from a total of 12 current polls, Obama leads in eight of them. From a total of 11,289 surveyed individuals, Obama takes 51.1% and Romney takes 48.9%. Obama would be expected to win an election now in the state with a 95% probability.

It has been a month since the last Oregon poll, and the new one finds Obama with a modest +6.6% lead over Romney.

Two new Pennsylvania polls both have Obama leading, albeit narrowly. In fact, Obama has single digit leads in seven of eight current polls, with Romney up in the eighth.

Obama takes one of the two new Virginia polls. It has been a long time since that has happened. But Romney easily leads in four of the six current polls, and one of the six was a tie. Overall, Romney gets a 69% probability of taking the state in an election right now. This is clear from the past three weeks: 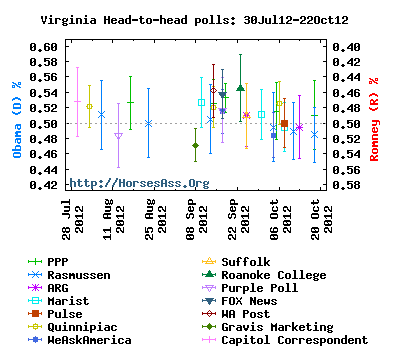 The new Wisconsin poll goes to Obama, but by a tight +2%. Obama takes all five current polls, but all by small margins. Here is the big picture: 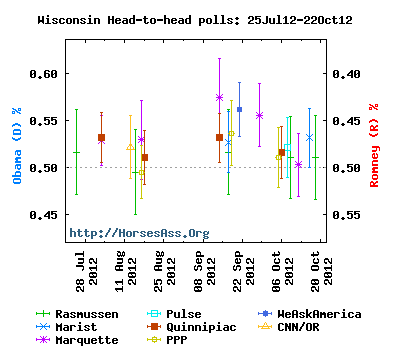 The long term trends in this race can be seen from a series of elections simulated every seven days using polls from 22-Oct-2011 to 22-Oct-2012, and including polls from the preceding 14 days (FAQ). 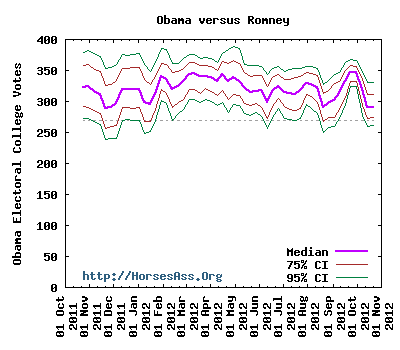 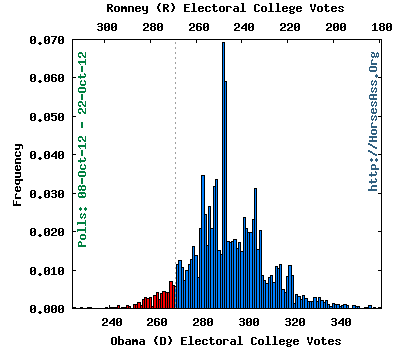