As I mentioned here and here, we have been treated to two new polls today in the race between Sen. Patty Murray (D) and Dino Rossi (R).

In some sense, both of these polls are older than yesterday’s Rasmussen robopoll of 750 likely voters (4.0 MOE) taken completely on the 26th of October that has Rossi up +1% (48% to 47%). Therefore, the only reasonable thing to do is combine all three polls into one meta-poll and do a Monte Carlo analysis. 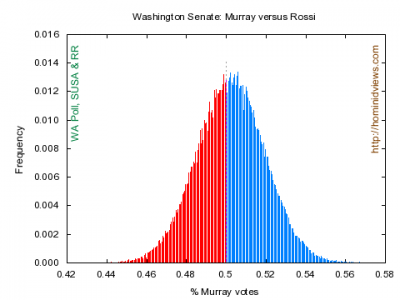 My usual near-election practice is to analyze all polls taken in the past two weeks. There are six such polls: 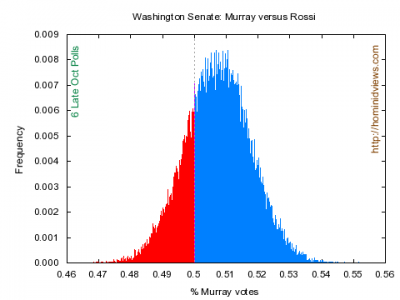 Statistically, the race is a tie because the probability of winning is under 95%, but the odds do favor Murray a little bit.