Suffolk University pollster David Paleologos, whose polls are aggregated into mainstream averages to show where the presidential race stands in the swing states, said he’s finished polling in Florida, North Carolina and Virginia because President Obama has no shot of winning those states.

“I think in places like North Carolina, Virginia and Florida, we’ve already painted those red, we’re not polling any of those states again,” Paleologos said Tuesday night on Fox’s “The O’Reilly Factor.” “We’re focusing on the remaining states.”

It pains me to have to admit…I’m with Bill O’Reilly on this one:

Fox News anchor Bill O’Reilly seemed perplexed, and asked Paleologos if he was certain those three states were already in the bag for Romney.

“That’s right, and here’s why. Before the debate, the Suffolk poll had Obama ahead 46 to 43 [in Florida] in the head-to-head number,” Paleologos responded.
“A poor place to be for a couple of reasons. Number one, his ballot test, his head-to-head number was below 47 percent before the debate, and it’s very, very difficult when you have the known quantity, the incumbent, to claw your way up to 50. So that was a very, very poor place for him to be.

“So we’re looking at this polling data not only in Florida but in Virginia and North Carolina and it’s overwhelming,” Paleologos concluded.

Whoa…hold on there a sec, Bucky! This poll?

Obama was LEADING in Florida. Not behind. Not tied. But leading by +3%.

A straightforward reading of that evidence suggests Obama was in the stronger position. But, Paleologos felt it was bad that Obama didn’t have 50%.

Two problems. First, 46% to 43% Obama lead did not include leaners. The poll actually did assessed leaners, though, and when you include them Obama is at 48%.

On top of that, the poll included 10 additional 3rd party or independent candidates! Those candidates got 2.5% of the “votes.” So…in a close state, where the scale for the two major party candidates goes from 0% to 97.5%, the middle of the scale is 48.75%, and Obama got 48%. That’s pretty fucking close to half the available votes.

Moreover, in this poll, Obama beat Romney in favorability 51% to 45%.

Once again, it is pretty fucking bizarre to use this poll to argue that Obama will lose the state.

And here’s the bizarre thing about North Carolina: Suffolk hasn’t done any North Carolina polling. I don’t find them in my database, RCP doesn’t have ’em either. I’ve checked with a few online polling aggregation sites, and find no evidence that Suffolk has done any polling in the state. I guess this means he is relying on other people’s polls (OPP, as we say in the biz).

So let’s look at OPP in Florida for the past two months: 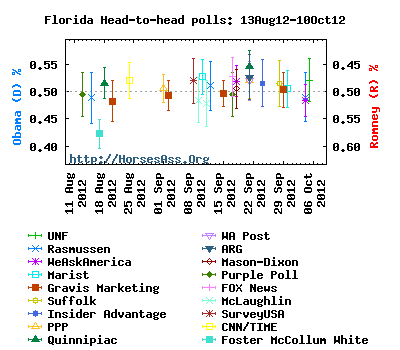 A plain reading of this graph suggests that Obama took the lead from Romney by mid-September and held a pretty solid lead until the post-debate period. And then it looks pretty much like a tie. My most recent analysis gives Obama a 54.9% chance of winning the state now, based on the last six polls in the state.

And now for some OPP from Virginia over the past two months: 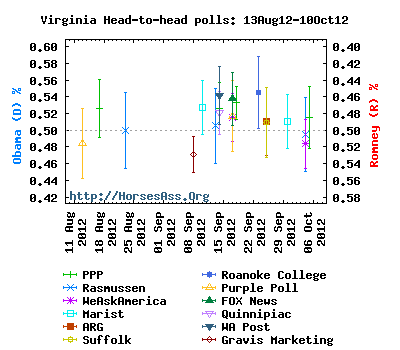 Really, Virginia shows an identical pattern. Indeed, my Monte Carlo analysis puts the race in Virginia at a tie right at the moment.

And North Carolina with two months of OPP: 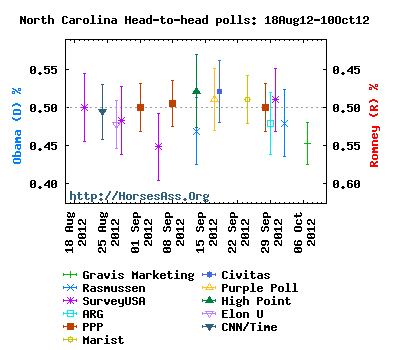 It looks like Obama led from mid-September to late September. The two October polls give Romney the lead, for sure, but a “certain win”? Well…Romney would have a 95% probability of winning the state in an election held now, according to my analysis of this polling evidence.

I can buy an argument the Romney is likely to take North Carolina. But he has a bit of work to do before it is a “sure thing.” For Florida and Virginia, only a fool could look at this collection of evidence objectively and find a “certain” win for either candidate. These two states are very close right now. More polling is needed, not less!

So I don’t know what the hell David Paleologos was babbling about. It seems illogical. You know…an opinion that is free from being encumbered by evidence.

The worst part: I’m still creeped out by finding myself in agreement with Bill O’Reilly. I mean, what the fuck?!?